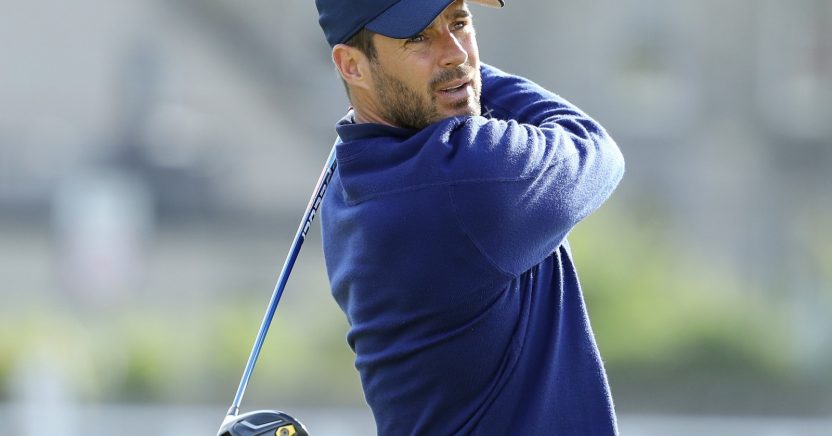 The former Liverpool, Tottenham and England midfielder reveals why you’re most likely to find him on the golf course when he’s not commentating on football or being bossed about by Freddie Flintoff on A League Of Their Own

My earliest memory of playing golf… was with my dad when I was a kid at a club close to where we lived near Bournemouth. We used to pitch up when the club had closed and play a few holes. Dad gave me a cut-down seven-iron, and I have some great memories of those days.

My home course is… Queenwood in Surrey. I try to play there a couple of times a week with a few friends. They are a good group of guys and good players as well. With my job, I’m very lucky to have some time off during the week. It’s a nice way to spend a few hours – get to the course early, have a bit of breakfast with the lads, and talk about the football from the night before.

My most memorable experience on the golf course was… I’ve been really lucky to have played in the Alfred Dunhill Links Championship a few times, so I have some great memories from that. I played with Luke Donald when he was world No.1. We had a great fourball with Lee Westwood – who was world No.2 at the time – and Johann Rupert. Luke and I both played really well and made the cut. Luke shot 62 that day, which equalled the course record. Luke and I played alongside Rory McIlroy and his dad in the final round at St Andrews, which was just incredible. So those are my two stand-out favourite rounds with pros.

My favourite golf resort in the world… has to be Pebble Beach in California. I go on a golf trip there every year with seven other friends. We play Cypress Point, Pebble Beach and Spyglass Hill. That’s about the greatest trip you could ever go on, and if you’re ever lucky enough to visit the Monterrey Peninsula, it’s well worth it.

My dream holiday fourball would be…Tiger Woods, Michael Jordan and my dad. That would be a lot of fun.

The thing I most love about golf is… how hard the game is. I love the fact that it is so difficult, and you will never be able to master it. From one day to the next, you just don’t know what’s going to happen. The other great thing is you can play golf for the rest of your life, or for as long as your body lets you. I can’t play football anymore because of my knee, but I can hopefully play golf for the rest of my life.

My favourite hotel… The Sandy Lane resort in Barbados. Great golf course, amazing hotel, and I remember that when my kids were young, they had the best kids’ club in the world. It’s just a very luxurious holiday and a real treat.

My best piece of travel advice is… don’t over-pack. I always take too much stuff.

The thing I most hate about holidays is… Flight delays. I hate it when you’ve just checked in and they say there’s a three-hour delay.