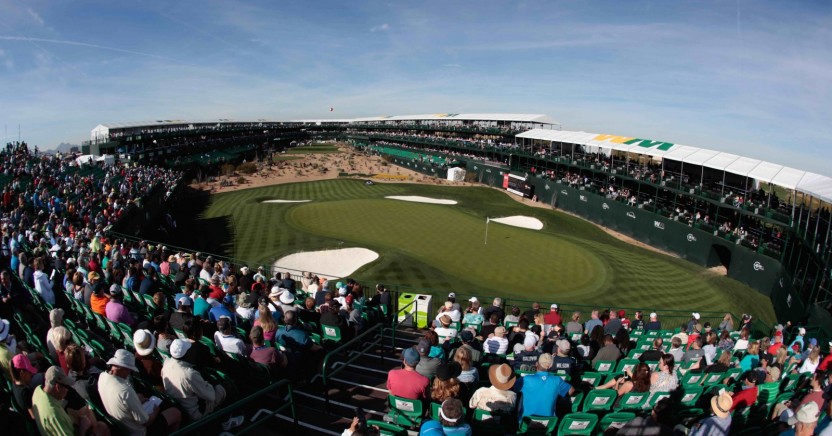 If you watched the Phoenix Open from the comfort of your armchair, Sarah Stirk urges you to visit TPC Scottsdale and play the infamous 16th on the Stadium Course and the other 35 holes that this superb Arizona resort has to offer

Ok, so Bubba Watson might have admitted he was only there because of his sponsors, but for many of the PGA Tour pros, the Waste Management Phoenix Open is the one event they absolutely, categorically do not want to miss. The fact it coincides with Super Bowl Sunday only adds to the allure of this event. The Waste Management Phoenix Open has always been one of my favourite stops on the PGA Tour. It’s a loud, raucous, brash, pulsating hive of activity – oh – and it features some pretty good golf too! The greatest show on grass they call it, so who are we to argue?

Since opening in 1986, The Stadium Course at TPC Scottsdale has played host to some of golf’s greatest moments. The course was designed by Jay Morrish and Tom Weiskopf specifically to serve as the stage for a PGA Tour venue. The tournament attracts over 500,000 fans annually and is the largest spectator golf event in the world by a country mile. In fact it’s behind only NASCAR in terms of best-attended annual global sporting events.

The focal point is, of course, the 16th hole, the fans enthusiasm transforming it into a coliseum type atmosphere, creating one of the most exciting settings in sport. This year saw attendance records smashed, with over 200,000 screaming supporters showing up to watch the action on Saturday – a single day record for the event. The total for the week was 618,365. Think about that for a moment, those figures are mind-bogglingly insane, and simply brilliant for the game of golf.

The only negative for me was the final result. Absolutely no disrespect whatsoever to Hideki Matsuyama, he’s a great guy and a huge talent, but Rickie Fowler and this tournament are pretty much the perfect fit, wouldn’t you agree? Colourful and charismatic go hand in hand for both in equal abundance. Fowler will be back next year to hopefully avenge defeat, and he won’t be lacking in love from the fans.

So many of you will have watched this tournament on TV, but how about going to tackle it for yourself? TPC Scottsdale offers two world-class championship courses. The Stadium Course, the signature design and home to the Phoenix Open, offers unparalleled views of the beautiful McDowell mountain range. The Champions Course also provides a stern test, and while it may lack the reputation of its more-heralded big brother, it certainly rivals it in terms of beauty and playability, and is a great desert golf experience.

While the PGA Tour only uses the TPC of Scottsdale for one week a year, the Stadium course maintains top-notch playing conditions throughout, with around 30 tour pros calling the place home. Kevin Stadler, who captured the Phoenix Open in 2014, Ricky Barnes, Robert Garrigus, Martin Laird, Troy Merritt and Parker McLachlin are just a few of the names attached there. The added beauty of the Stadium course is its playability. The superb condition, elite practice facilities, and the warm winter bring plenty of keen golfers out to the desert.

Trouble comes in the form of 72 bunkers strategically placed in the fairways and around the greens. Desert vegetation such as the saguaro cacti always makes for an interesting test, and water comes into play on six of the holes, including three of the last four, as Fowler will attest to. The closing stretch is what really makes this course great value for golfers and spectators alike. It’s a thrilling finish, even without a few hundred thousand watching your every move.

After the success and attendance figures we’ve just witnessed, 2017 will be hard to beat, but who’s to say it won’t be louder than the last time? In the meantime, go and create your own little piece of golfing magic at arguably the most talked about hole in the game, even if it’s only in front of your mates or on Twitter. Failing that, being part of the frenzied crowd cheering on the world’s best golfers is without question a few days you will never forget.