Perhaps it’s because I have a fondness for Guinness, but don’t understand what a single malt whisky is all about, that Ireland just edges it over Scotland as my favourite golf destination. And with my game slipping further south as my body protests ever more loudly at having to make the effort to swing a club, the generally more relaxed attitude of the Irish to double bogeys and worse chimes with my own limited ambition.

So, in short, I leapt like a leprechaun at the opportunity to go with Club Choice Ireland to play four of the finest courses in and around Dublin. Club Choice Ireland, I should explain, is a unique alliance of courses, resorts and hotels around the south-east and along the east coast of Ireland that offers outstandingly good value all-inclusive golf packages.

Taking the Stena ferry over the Irish Sea avoids the queues, hassle and mayhem that is airports these days. Holyhead is heaven compared with the hell that is Heathrow. And throwing the clubs in the boot is both cheaper and less cumbersome than schlepping them around terminals in search of ‘Outsize Baggage’.

After a little over three hours after slipping our moorings, we were cruising up the Liffey and docking in downtown Dublin. From there it was roughly half an hour’s drive south to Druids Glen Hotel and Golf Resort in County Wicklow.

Squeezed between the Wicklow Mountains and the Irish Sea, and set in 360-acres of glorious countryside in the heart of Ballykissangel country, this fabulous five-star hotel with its 144 rooms and top-notch suites is pure comfort and joy.

Although you can stroll the few hundred yards to the two attached courses, nearly everyone takes the shuttlebus to save energy so that they can walk around possibly the prettiest parkland layout on the planet. Sadly, there wasn’t time to play Druids Heath, but Druids Glen, a former venue of the Irish Open, is the more famous of the pair and is simply stunning. 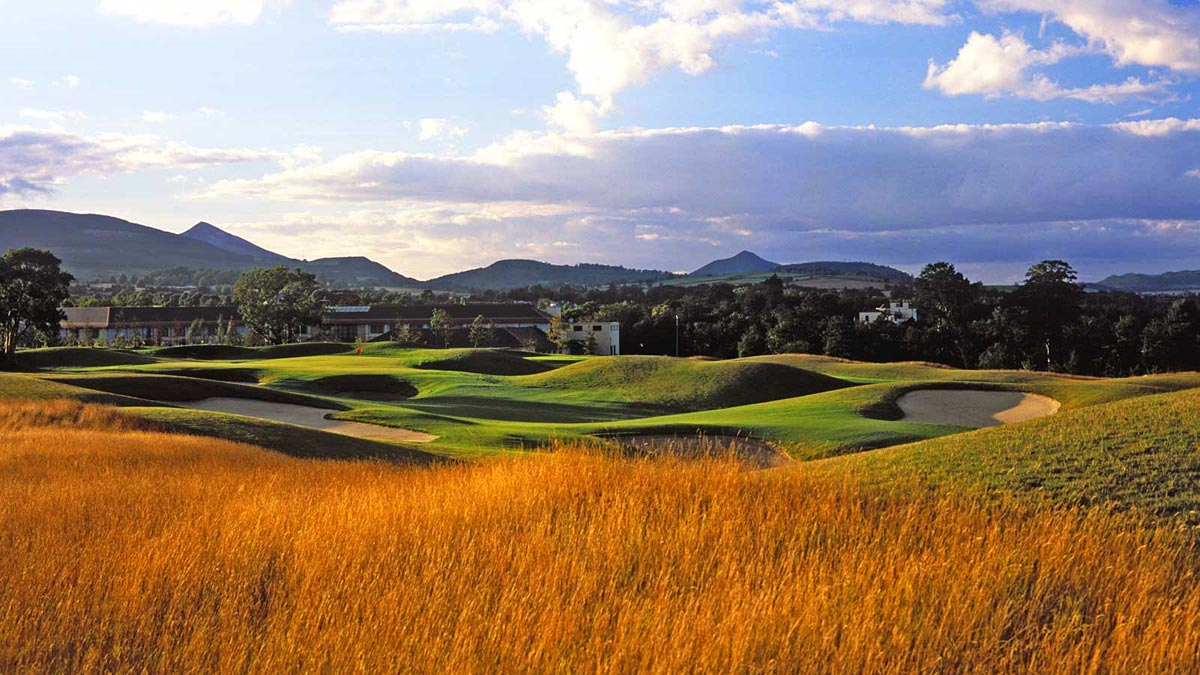 Fortunate to have been to Augusta, I can honestly say that comparing the two is not nearly as fanciful as it sounds. Both are breathtakingly beautiful, magnificently manicured and enjoy sufficient elevation to provide those wonderful ‘wow’ moments. The par threes are gorgeous and, coincidentally, it’s the 12th at both that are the stand-out stunners. Flowers, too, are common to both while the magnificent water features at Druid’s Glen are simply magical. Don’t tell anyone I said this because I’ll never be invited back to Augusta but, because it has a more natural feel, Druid’s Glen edges it for me.

Rather like stepping onto the tee after your playing partner has belted a 340-yard drive down the centre of the fairway, what a ridiculously difficult act Druids Glen is to follow. Remarkably, Powerscourt pulled it off. Just 15 minutes down the road and similarly blessed with two terrific courses, Powerscourt rose to meet the impossible challenge.

With similar striking views up to the mountains and occasional rare glimpses of the sea, the East course is a lot more rugged than Druids Glen but is no less of a challenge. Designed by Walker Cup player Peter McEvoy, it has a traditional mix of four par threes and fives and 14 par fours. There’s not a weak hole among them and the distinctive feel of mature parkland bestowed upon them all by the striking specimen trees adds to the grandeur.

Having tackled, if not quite tamed, two inland tracks the time had come to drop down to sea level and test my game among the mighty dunes. Links golf has a majesty and authenticity that sets the pulse racing at the first whiff of salty sea air and the clutch of courses around Dublin Bay are superb. 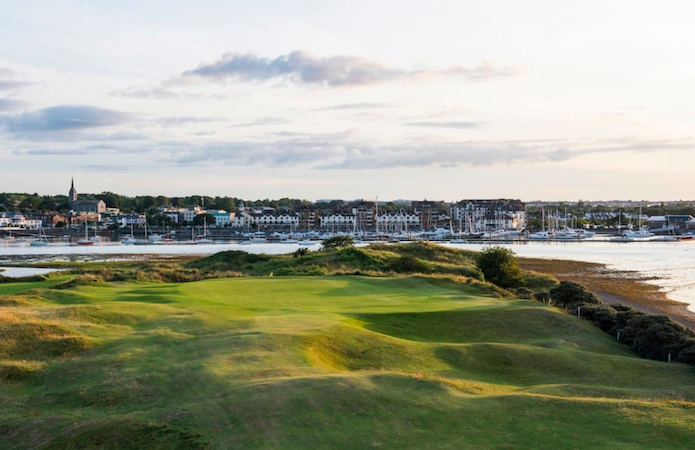 The 13th hole at The Island Golf Club

Having previously been beaten up by both Portmarnock Links and Royal Dublin, I opted for a couple of fresh challenges with no mental scar tissue to worry about. The Island Golf Club isn’t an island at all but it looks like it could be and that’s good enough in this part of the world where the line between fact and fantasy is thoroughly blurred.

Overlooked by the village of Malahide, the links is located in some of the most stunning dunes on the east coast of Ireland. Founded in 1890, it is also one of the oldest golf courses in Ireland and was recently ranked 13th in Golf Digest Ireland’s Top 100. It enjoys an enviable international reputation and currently hosts regional qualifying for The Open Championship and this year co-hosted the strokeplay qualifying for the British Amateur. It’s fabulous and no matter how hard you struggle, you will want to come back for more.

Unlike The Island, St Anne’s is actually on an island and is a lot less threatening. An immediate neighbour of Royal Dublin, it was founded in 1921, but was only extended to 18 holes about 30 years ago. It underwent a redesign in 2003 and an impressive new clubhouse was opened in the same year. Plateau greens are something of a feature on a course which adjoins a nature reserve and where the views out to sea and up to the mountains are magnificent.