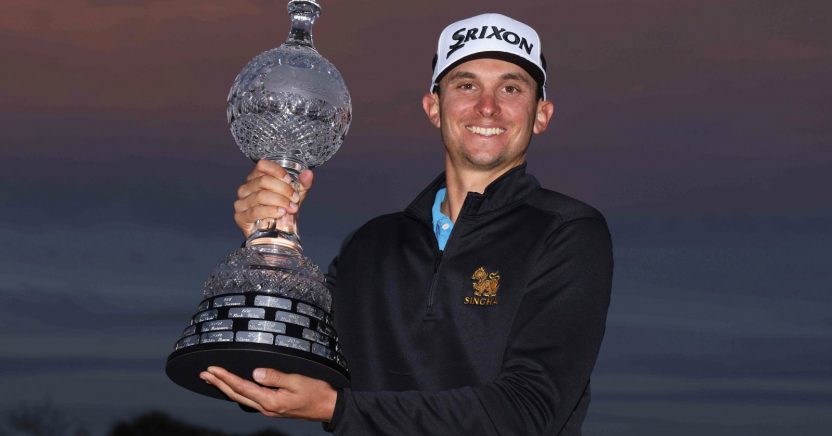 American John Catlin bagged his second European Tour title in a month with victory at the Irish Open at Galgorm Castle Golf Club.

The 29-year-old from California shot a final round 64 to come from four shots off the lead to take the title and follow up his win at the Andalucía Masters in Valderamma just three weeks ago.

Catlin started the final day four strokes behind Wolverhampton’s Aaron Rai, who had led from day one, but the American quickly moved up the leaderboard as he made the turn in three under par. A bogey on 13 was cancelled out by a long birdie putt at 15 which drew him level with Rai on eight under. He pulled clear after a birdie at 16, and then secured his seventh birdie of the round on the par-five 18th to sign for a six-under par 64.

Rai, who was looking to add to his win at the Hong Kong Open in 2018, birdied the 17th to move to nine under, but needing a birdie to force a play-off, he hit second shot into deep rough on the left hand side of the green and a dropped a shot to hand Catlin the title.

Catlin, who has mainly being playing on the Asian Tour for the last few years, where he has picked up four wins, said: “It’s pretty hard to describe. So many years of hard work have gone into this moment. It was my goal to win again at the start of this week, to have accomplished it is something truly, truly special.  I had nothing to lose. I was going after every flag, I had good numbers and the greens were soft. So I started taking aim and hit a couple in their close. I made a long one on 15 and that three wood on 18 was so satisfying. To just hit a big high draw in there like I know I can, under those conditions, really is hard to put into words.”

Catlin arrived in Europe after the tour re-started in late June ranked 230th in the world rankings, but following his two wins is now comfortably inside the top 100, and has moved up to 14th in the Race to Dubai rankings. It marks a big turnaround for the American, who only a month ago was forced to withdraw from the UK Championship at The Belfry after violating the tour’s COVID-19 safety protocols, after he and his caddie went to a restaurant in the days leading up to the English Championship.