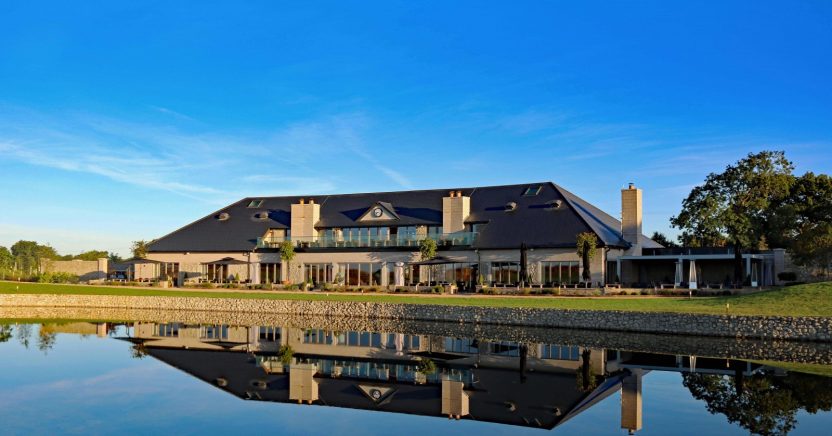 Six years after it first opened, Centurion Club has developed into the epitome of a modern golf club, where its members enjoy first-class service and stunning clubhouse facilities to match the quality of its world-renowned championship course, writes Nick Bayly

The reasons for golf’s declining popularity are many and varied, but among those that encouraged the owners of the Centurion Club to set up shop on the outskirts of Hemel Hempstead in 2010 was golf’s failure to keep up to speed with the lifestyle demands of the modern member.

The lack of a genuine service culture, draconian dress codes, endless tee time restrictions, treating female members as second-class citizens, and a diminishing pride in the presentation of golf courses and clubhouses, many of them worn down by years of under-investment, gave the team behind Centurion hope that a club that dared to do something differently could not only survive, but positively thrive. 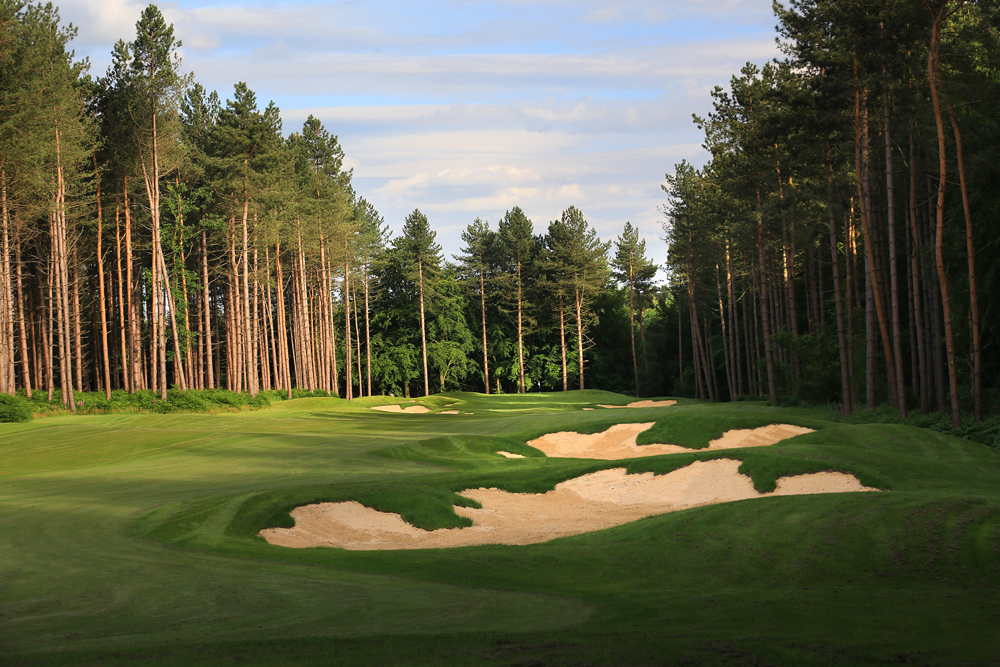 Centurion has matured into a truly world class layout

Located a few miles west of St Albans, and just a few minutes from junction 8 of the M1, Centurion has shaken up the traditional private golf club model by offering a genuinely five-star, members-only experience, while remaining both affordable, yet refreshingly unencumbered by the stuffy and elitist attitudes that many high-end private clubs insist on adhering to.

Representing a blueprint for how a golf club for the 21st century should be operated, Centurion has been open for the best part of six years now, and in that time has built up a 600-strong membership that is enjoying a fast-maturing golf course and the kind of facilities that you’d expect from a five-star hotel.

With that ethos, it will come as no surprise that you’ll find no club captains or green committees here, and you’ll certainly find no posters explaining the dress code (there isn’t one), and there is a refreshing absence of noticeboards. It’s access all areas, with not a ‘keep out’ sign in sight.

While the 18-hole golf course – more of which later – has been open from the beginning, as it were, the clubhouse, as is often the case in new builds, came later, with the impressive two-storey structure that spans the entire length of the large pond that guards the right-hand approach to the course’s closing hole, opening in 2016. The £5 million edifice is the icing on a particular appetising cake, the likes of which are no doubt being baked by the club’s expert team of chefs, who have turned the impressive ground-floor restaurant into a destination not just for golf club members, but for diners from all over the region. Saturday cream teas are a virtual sell-out, as are Sunday lunches, while Friday and Saturday nights always require a reservation to secure a table. 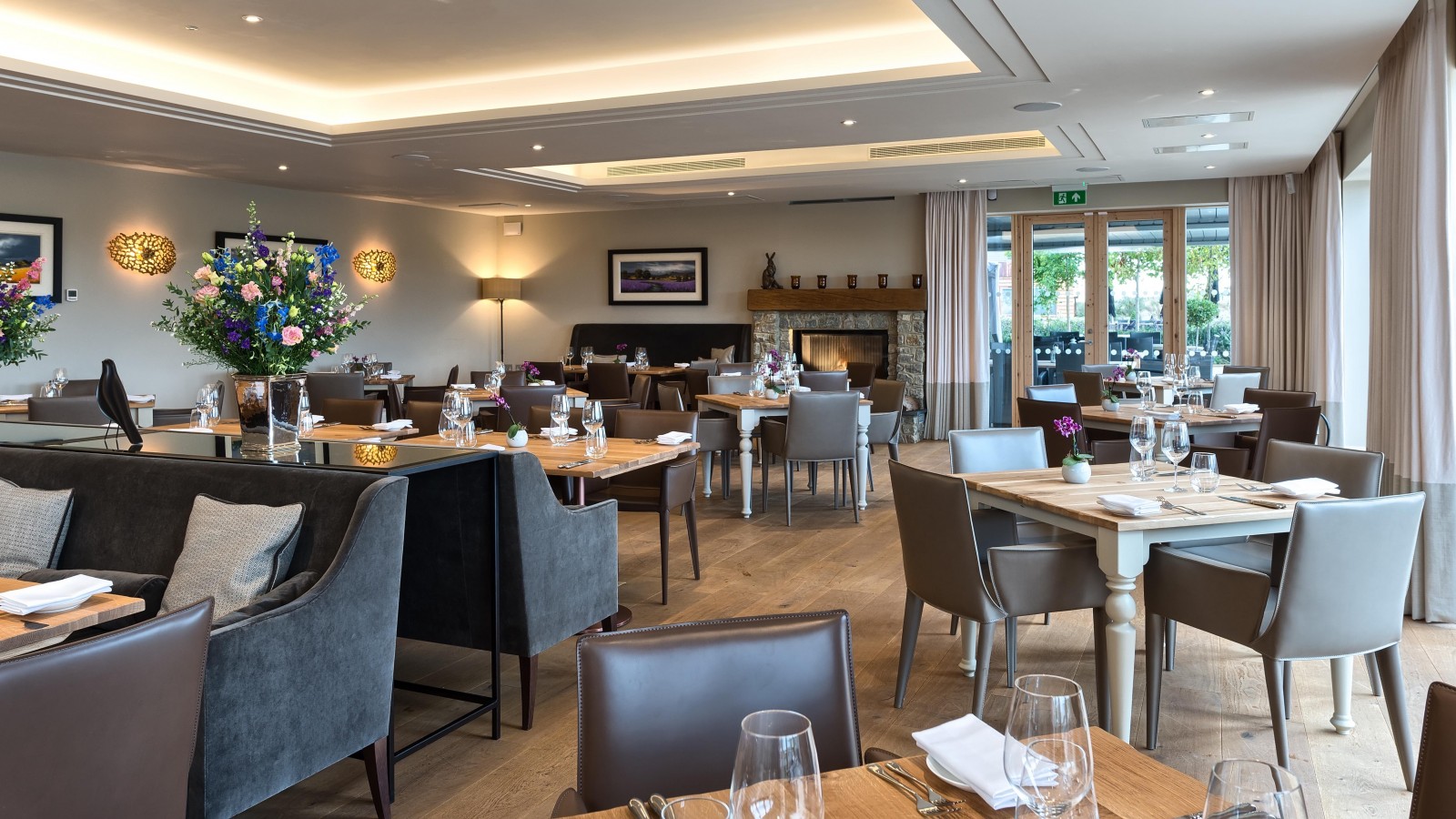 Michelin-starred Jeff Galvin, who is a member at the club, helped set up the restaurant, and although he is no longer directly involved, his ethos and commitment to quality remains very much intact. And while you can still get a damn fine bacon sandwich – on a toasted brioche bun, of course – in the relaxed surroundings of the upstairs sports bar before your round, downstairs in the more formal 80-cover dining room, the seasonally-changing menu offers a slightly more refined culinary experience.

It’s a clever part of the clubhouse’s design that it disguises its true purpose with such skill. All the golfing elements – the locker rooms and the golfer’s bar and lounge, are located upstairs, tucked away from the more public spaces, while the ground floor wouldn’t look out of place in a boutique hotel. Walk into the side entrance, and past the pro shop – which is more akin to a boutique emporium – and you’d be hard-pressed to know you’re in a golf club at all. There are no endless rows of wooden noticeboards and not a silver trophy in sight. It’s a light and airy space, that moves seamlessly from one area to the next, feeling intimate, yet spacious, and above all, relaxed. 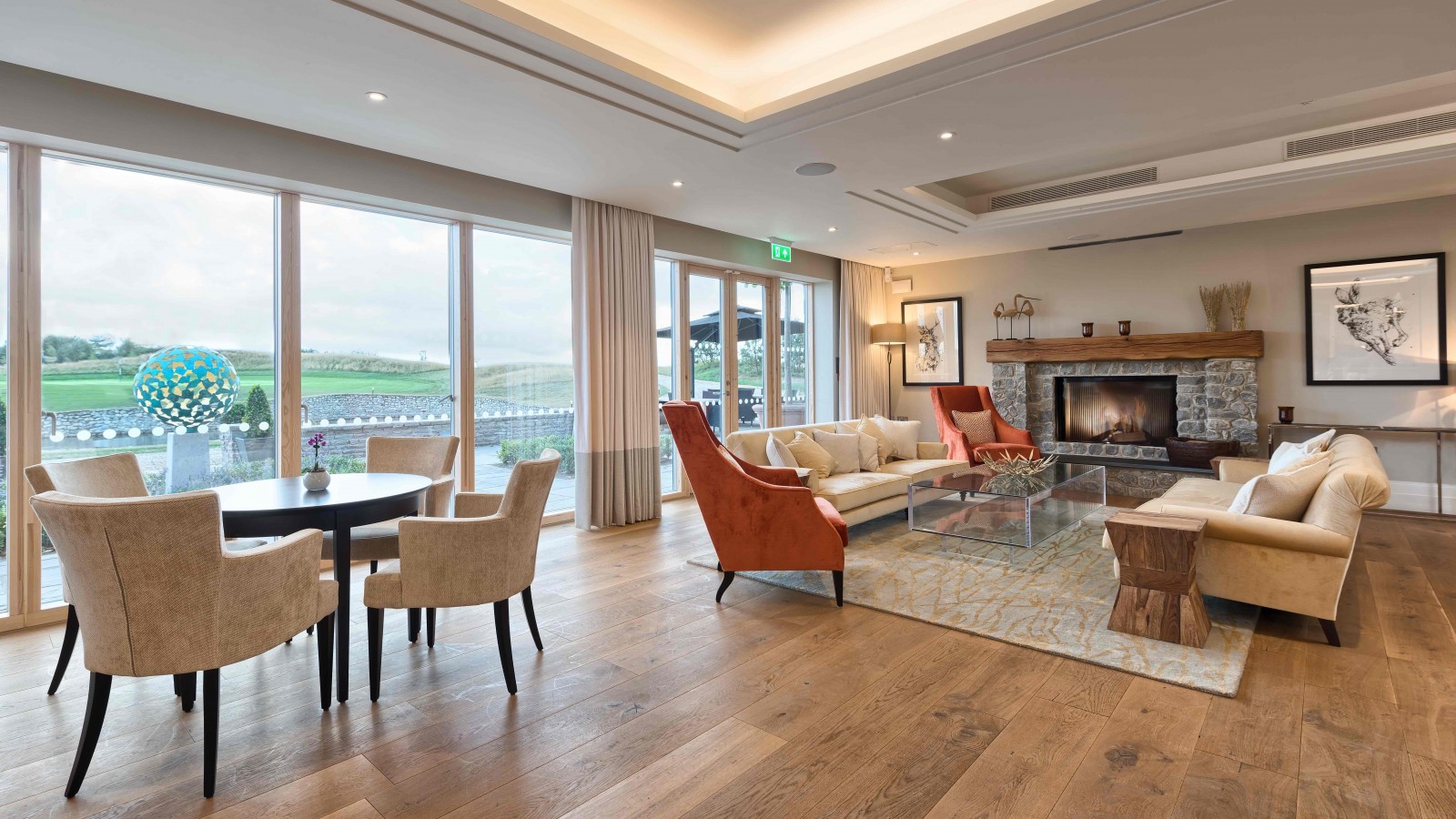 Elsewhere within the building there are separate rooms for private dining, conference spaces, although only members and companies with connections to the club are allowed to host corporate golf days here. And while the main entrance at most clubhouses are often cluttered with a haphazard scattering of trolleys and golf bags, here, all of the accoutrements of golf, including a small buggy fleet, are hidden behind high stone walls – out of sight, yet close at hand.

The club’s co-founder and managing director is Scott Evans, a genial Scotsman who brings almost 30 years’ experience working in golf club management at the likes of Loch Lomond, Dubai Creek, Yearwood Lakes, and, most recently, Troon Golf Management, to the table, and he knows better than most what it takes to keep discerning golfers happy. “Our plan from the outset was to create a club that rivals and goes beyond the very best for its quality, while getting rid of the all the stuffiness and small-mindedness that permeates through many traditional members clubs. You won’t need a certain length of sock or type of trouser to play here, let alone a jacket, and we encourage all our members to bring their families and to treat it as their golfing home form home.” 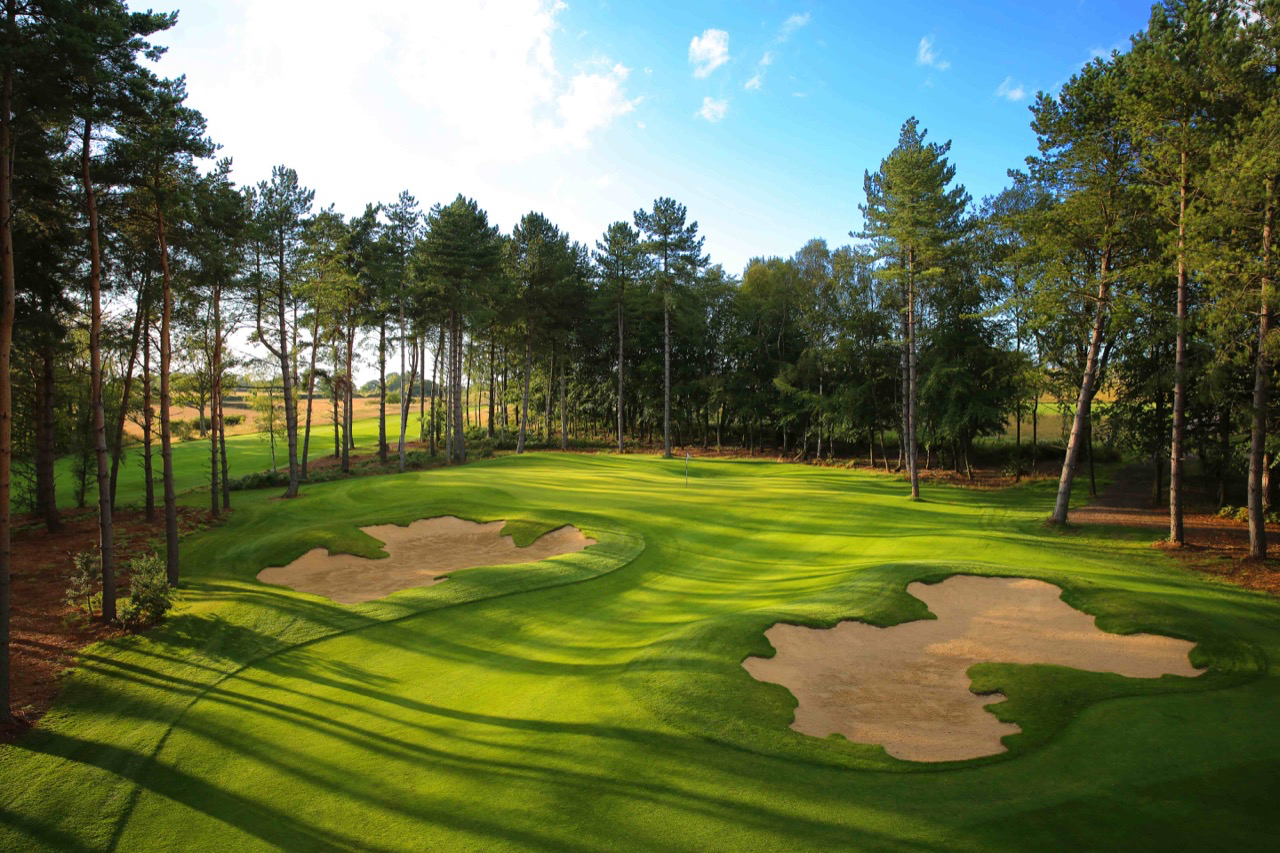 The 4th presents a dog-leg par four, where only the perfect drive will set up an angle to reach green

Evans adds: “Our aim has always been to focus on providing the very best facilities for our members, and let the reputation and standing among the golfing community evolve. The challenge has been to create a quality product worthy of our location so close to central London, and to be considered one of the finest available.”

While the clubhouse is suitably impressive, the reputation of any golf club still quite rightly hangs on the quality of its golf course, and here is where the Centurion more than lives up to the hype. While many courses state their claim to fame on a handful of good holes, it’s as hard as it is unfair to single out any one hole at Centurion, given the quality and variety of the challenges on offer.

Measuring 7,195 yards from the back tees, which plays to a par of 72, the middle and forward men’s tees take it down to a more manageable 6,850 and 6,555 yards respectively. The layout begins in an attractive area of pine woodland on the western edge of the 250-acre site, where the opening five holes cut a green swathe through the tree line. A sweeping downhill right-to-left par five opens up proceedings nicely, before switching into a stunning par-three, where a raised green provides a tempting, if often elusive target. 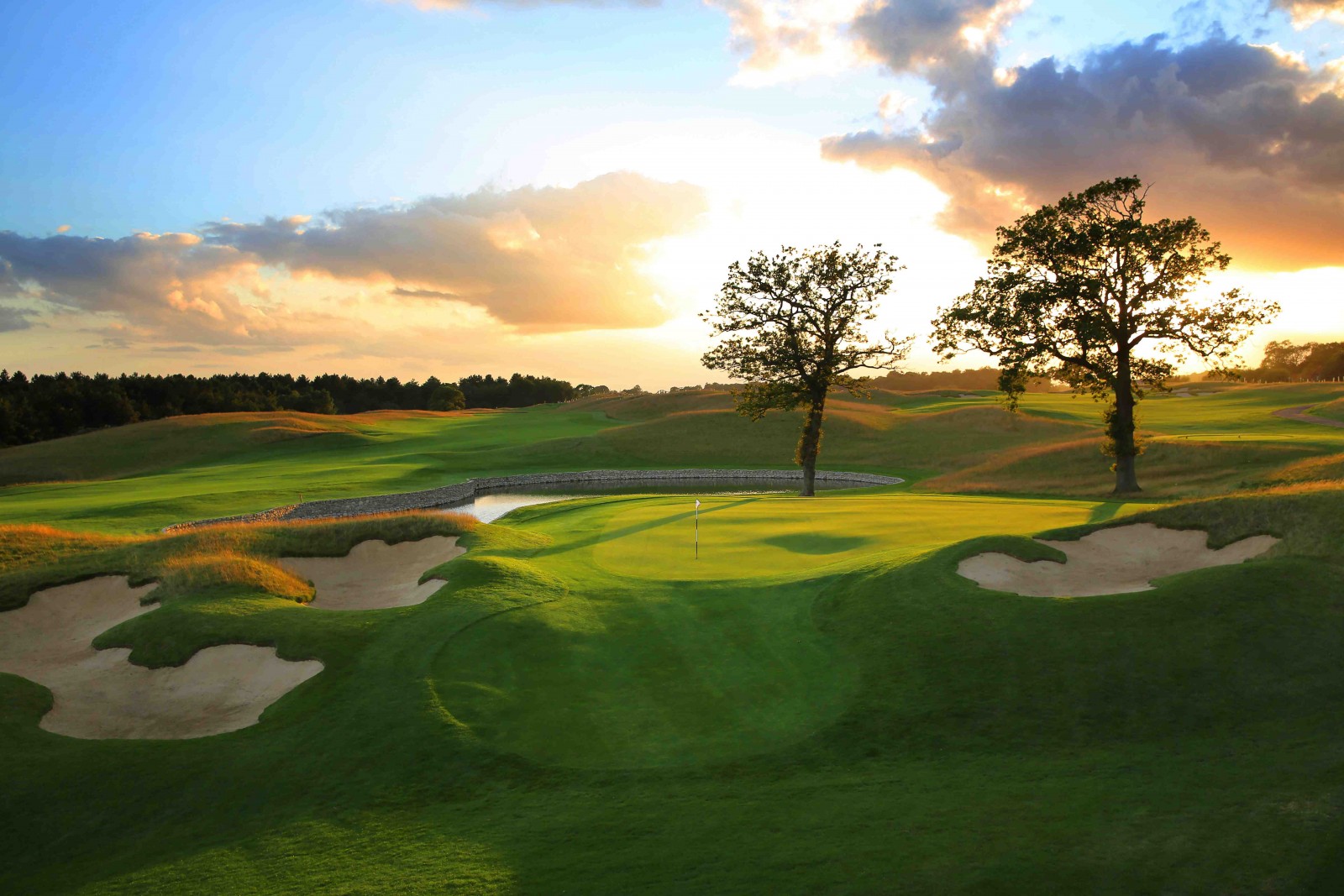 This is followed by a superb 405-yard par four, which swings right to left, with a greedy bunker guarding the corner of the dog-leg. After the beautiful par-three fifth – a 160-yard downhiller to a flat green with little margin for error on all sides – the course opens out over more rolling terrain, although thanks to sizeable mounds between the fairways, a sense of individuality is maintained for almost every hole. The 450-yard sixth is a really testing par four, with a big drive required to bring a flag that is hidden behind a raised bank into play, while the ninth introduces the first of four significant water hazards, although the toughest of them is probably the 12th, a 400-yard par four with a pond fronting the putting surface to catch under-hit approaches. 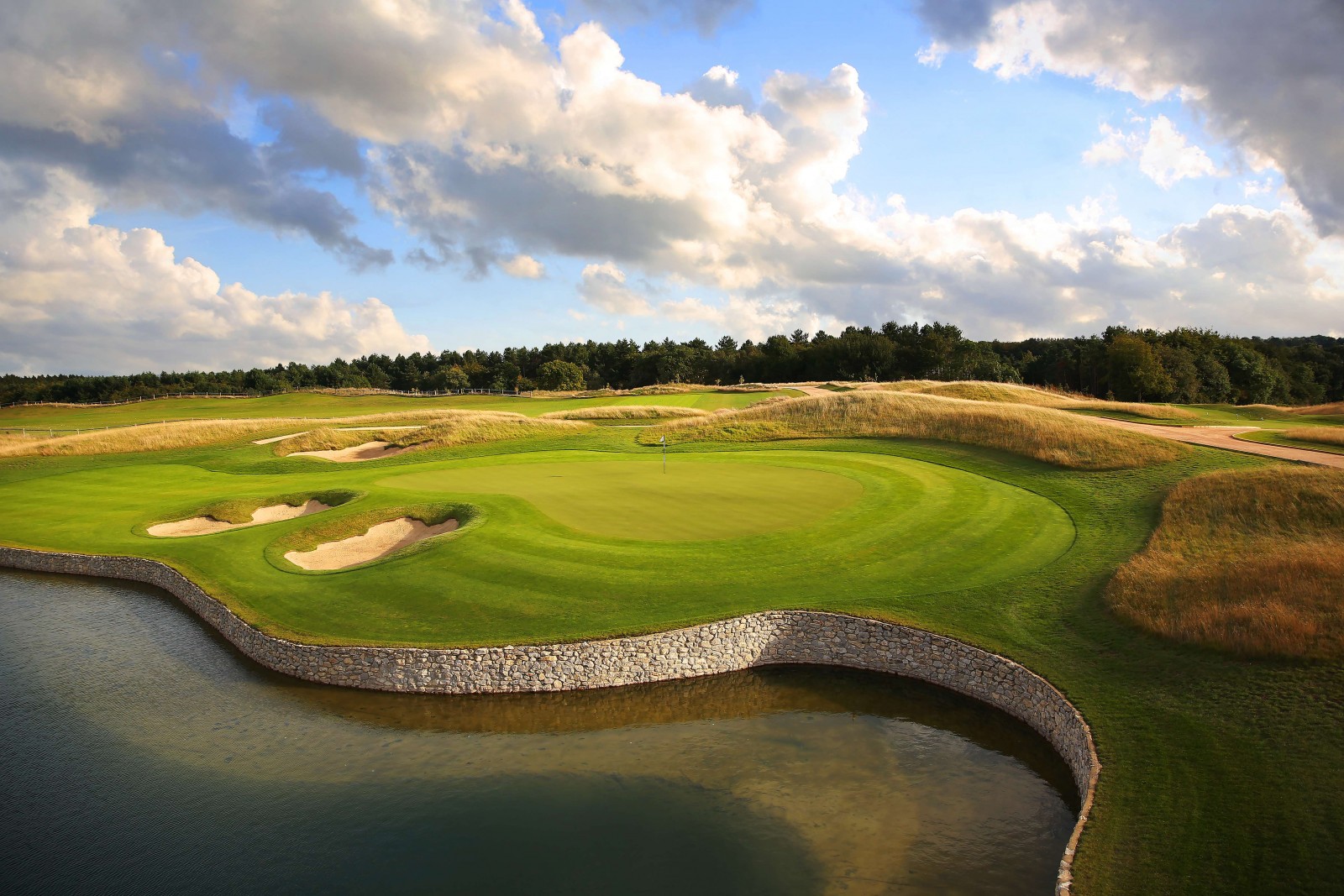 The 190-yard 14th is as testing a par three as you’ll find, playing uphill all the way to a raised green that has trees back, right and left, and bunkers at the front, while the 150-yard 17th is another stunning short hole, with two trees standing like sentries behind the green, while water lurks to catch anything hit long and left.

The holes have all been given Latin names, such as Alma Mater, Pro Forma and Hydro, to reflect the Roman history of the local area, and the course closes with the aptly-named Ad Infinitum, a 545-yard par five whose green sits below the clubhouse. With the putting surface protected by a large lake bounded by a stone wall to the right, it’s a fitting finale to a thoroughly entertaining round that will test all parts of your game.

Prepared to tournament specifications, the course offers all year-round playability, with arguably some of the best putting surfaces to be found anywhere in the country. Built on sand, the bent grass surfaces are like carpets – fast, true and firm, yet receptive to the right kind of shot. Given its tour-standard quality it was perhaps fitting that the European Tour chose Centurion to stage the revolutionary GolfSixes event in 2017 and 2018, which not only introduced the golfing world to a faster, more exciting alternative to 72-hole stroke play tournaments, but also alerted the world to the quality of the venue, with many of the players that took part in the event coming away wanting a regular, conventional Tour event to be held at the club in the future.

That request has been met, in part, as next year the club will host one of the showpiece events in the women’s professional game, the UL International Crown. The biennial matchplay event, which is run by the LPGA Tour and managed by IMG, sees teams of four representing the top eight golfing nations in the world compete over four days of matches from August 27-30, 2020. It’s a real feather in Centurion’s cap, and promises to showcase the talents of the world’s best women players to a UK audience for the first time outside of the Women’s British Open.

For those that would like to enjoy their own piece of the action at Centurion, seven-day, corporate, business, and international memberships are offered, all of which are tailored to provide the most flexible options to suit the needs of the golfer, whether that be one who plays two or three times a week, or just once a month. Either way, being a member, or knowing one, will be the only way to access the course, as visitors can only play as a member’s guest.

“The different membership categories offer greater flexibility to suit each member’s lifestyle,” says Scott. “We want people to feel that it is their club, and they can come and go as they please. There are no tee times, no visitors, and the course will never be bunged up with endless inter-club matches or societies. We have created a club that is already renowned for its friendly atmosphere and outstanding standard of service. We want to create a distinct ‘wow’ factor which ensures that once you’ve visited the club you’ll never forget it.”

I, for one, certainly haven’t, and I believe they’ll be plenty of others out there who will agree with me once they’ve had a glimpse of the way they do things at Centurion.