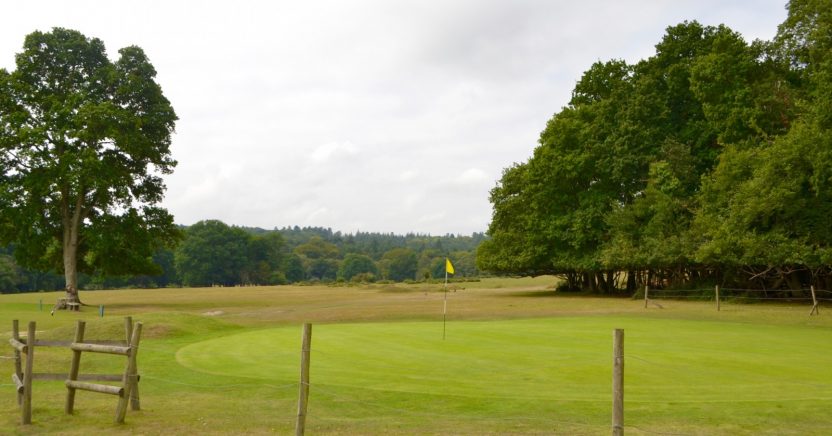 Set in the stunning surroundings of the New Forest, Bramshaw Golf Club’s Forest Course is not only the oldest 18-hole layout in Hampshire, but offers a truly unique golfing experience, courtesy of its naturally-grazed fairways and roaming livestock

It didn’t take me long to discover that they do things differently in the New Forest, when I turned a corner just a mile or so off the M27 near Lyndhurst, and came across a pig nonchalantly trotting over the road.

And then, around the very next bend, I had to slow down to pass two donkeys that were happily chewing at the hedgerow, seemingly oblivious as I tried to give them a wide berth on what was a narrow stretch of road.

Such scenes are common for golfers at Bramshaw Golf Club, whose members all but share the land on which its two 18-hole golf courses are built. As the oldest golf course in Hampshire – it was established in the 1880s – the relationship between man and beast goes back many generations, with the Royal & Ancient game first having been played on Brook Common back in the 1860s. Under the private ownership of the Crosthwaite Eyres family since 1953, whose current generation lives on the estate, The Forest Course is a fine example of a golf course living in harmony with its surroundings.

With the club falling within the confines of the New Forest National Park, animals have the right to roam – and roam they do, even if it means ambling across a fairway while you’re in mid-backswing. 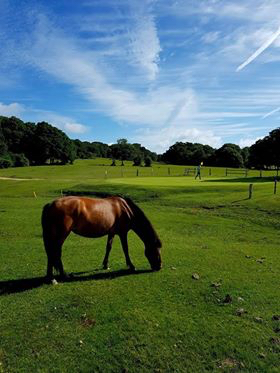 Ponies and livestock are free to graze the Forest Course, which enables the fairways to be kept short without the need for cutting

This is especially the case on the club’s historic Forest Course, an 18-hole, 5,757-yard layout that is almost unique to these shores. Built on common land, it’s golf at its most natural, with only the tees and greens being managed, while the fairways are left to take nature’s course, barring a bi-annual cut to keep them playable. While the small, but excellent greens are partially fenced off in order to preserve the sanctity of the putting surfaces, grazing cattle, pigs, deer and ponies are left free to leave the odd ‘loose impediment’ for golfers to contend with, although there are lots of Local Rules to overcome any sticky situations.

With stunning countryside views, and some challenging topography below your feet, it’s safe to say that a round on the Forest Course will linger long in the memory. And, at just £20-£30 for a round, it’s an absolute bargain providing you enter into the spirit of it all, and don’t mind having to extract your golf ball from the occasional cow dung or roll it out of a rabbit scrapping.

The greens are also unique on the Forest Course, with several of them completely surrounded by wooden fencing to keep the livestock from chewing the putting surfaces and leaving heavy hoofprints all over them – golfers enter via a zig-zag style gate – while others are guarded by less severe defences, seemingly enough to scare all but the most determined grazer from venturing onto the short stuff.

And while the National Park is quite rightly very strict about changes that can be made – the land is designated an SSSI – the club has, through highly diplomatic discussions and the negotiation of a lot of red tape, recently been allowed to partially redesign the course, altering the layout in order to better accommodate the twin demands of golf and grazing.

To avoid golfers being greeted on the first tee by a fairway that is constantly trampled by a herd of cows from the neighbouring farm, the layout has been slightly rejigged to make the old first hole the 4th, which has changed from a short par four into a long par three. Elsewhere, a completely new 15th hole has been built, replacing the old 200-yard, par three with a 318-yard par four. The latter change, which comes into play in April, will see the course’s par remain at 69 for men and 71 for ladies.

Taking into account the awkward lies and tight playing surfaces, a round on the Forest Course is no pushover, despite the generous fairways. There are plenty of changes in elevation to consider, and a few blind approaches, while a babbling brook bisects many of the holes – often at inconvenient times – with forced lay-ups and carries adding to the difficulty.

Among the many highlights is the par-five sixth, a 476-yarder that requires a slight draw off the tee for right-handers to set up a lengthy shot over a water-filled gully to a raised green. Shorter hitters will lay up a sensible distance short of the stream to set up a still less-than-straightforward 80-yard chip.

Peter Alliss, who spent much of his early days around these parts, is said to be particularly fond of the 340-yard ninth, a testing par four, which requires an accurate tee shot to set up a sight at the green, which is placed at an angle close to the tree-line and tucked in hard behind the brook. The late John Jacobs, who lived in Lyndhurst, was also a big fan of the Forest Course – and one-time president of the club – and he spent many happy days playing the course before age caught up with him.

The round closes with the tricky 160-yard, par-three 17th, which requires a carry over a stream, with anything under-hit destined for a watery grave. Finally, the par-four 18th, which climbs back up the hill to the highest part of the golf course, demands a strong tee shot to set up one final chance of a birdie.

All in all, it’s hard not to walk off the Forest Course’s final green with a great big smile on your face, and the feeling that you’ve ticked a very significant box on your golfing bucket list. Yes, it’s a little rough around the edges, and, yes, you may need to give your shoes an extra clean after your round, but it’s golf as the Good Lord intended, and is all the better for it in this era of identikit courses where there’s barely a blade of grass out of place. It’ll certainly test all the elements of your game – and your imagination – but it will live much longer in the memory than virtually all but the Open Championship layouts that you have to save up for years to play.

The revamped configuration is set to be open on March 30 – shortly before the 2018 season officially gets under way – with a special preview day, which is open to all golfers, followed on April 1 by the Bramshaw Easter Meet, a 36-hole Open Pairs competition which will be played across the Forest and Manor Courses (see box below for entry details).

While the Forest Course is what makes Bramshaw unique, golfers visiting the club should not miss the opportunity to play the 6,400-yard Manor Course, which opened for play in 1972. It has since matured into a fine parkland layout, and, while not long by modern standards, features a significant number of tight, tree-lined holes, making it a challenge for all skill levels. And although there are just 30 bunkers to navigate, they are particularly well placed, especially around the small greens, where only the slightest misjudgment can leave you reaching for your most lofted club. 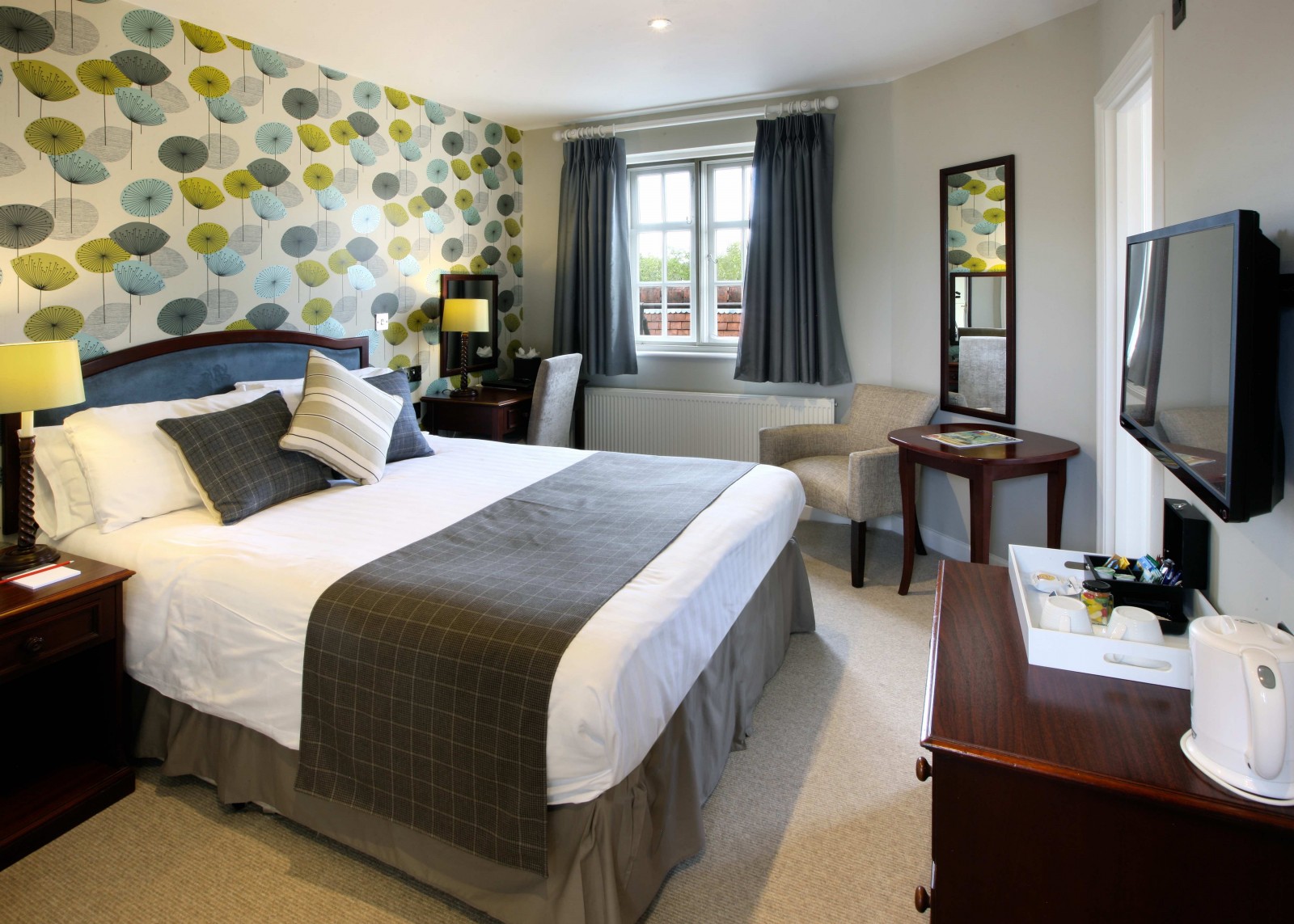 With two courses to play, and lots of other things to see and do in the area, an overnight stay is all but essential for the visiting golfer, with the Bell Inn providing the perfect place in which to hole up between rounds. Under the same family ownership as the golf club, it offers 28 extremely comfortable rooms – and two more beside the clubhouse – all boasting en-suite facilities and offering the very essence of country house hotel chic. The spacious restaurant serves up an excellent range of home-cooked food,

much of it sourced from the estate and other local farms, while there is a wide choice of locally brewed ales to sample from the bar during the inevitable post-round analysis.

So whether you’re looking to test your game on one of the UK’s most unique courses, book your next golfing break, or plan a society outing, Bramshaw Golf Club really does tick all the boxes.

FOREST COURSE PREVIEW COMPETITION, MARCH 30
A special Preview Opening Day competition is being held to mark the opening of the new-look Forest Course. Entry costs just £15pp, and includes an 18-hole individual Stableford competition, refreshments, and a discount voucher for The Bell Inn. Tee times will be between 10am-3pm.

BRAMSHAW OPEN PAIRS COMPETITION, APRIL 1
On Easter Sunday, the club will host the Bramshaw Easter Meet, an open pairs competition played over the Forest and Manor Courses. Limited to 120 pairs, it will feature 18 holes on each course, pre-match breakfast, and prizes, with the overall winners receiving the Sir Oliver Crosthwaite-Eyre Trophy.

BOOK YOUR BRAMSHAW BREAK
Stay-and-play packages comprising one round on the Manor Course and one on the Forest Course, plus overnight accommodation in The Bell Inn, with dinner, bed and breakfast, start from just £124pp (Sundays), while two-night, two-round stays begin at £164 between Nov-March. There are special offers for groups, with one in 12 staying free. To book, call 023 8081 2214, email bell@bramshaw.co.uk, or visit www.bellinn-newforest.co.uk