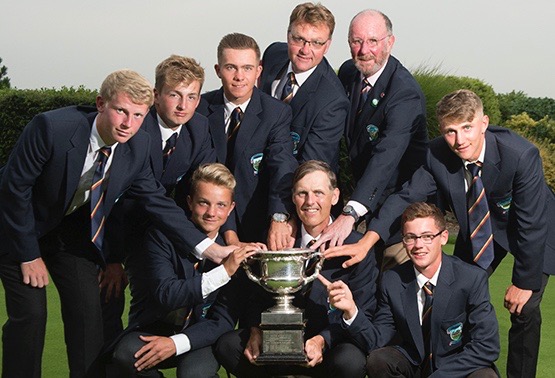 Wiltshire successfully defended their title in the English Boys’ County Championship, winning by just a half point from Yorkshire after a tense day of thrilling golf at Cumberwell Park Golf Club in Wiltshire.

Jake Bolton scored the winning point for Wiltshire after playing round in five-under par and closing out his game 3&2. “It is an unbelievable feeling,” he said. “We work great as a team, we’ve got such good team spirit. We knew Yorkshire were still in it, but we just focused on our own game and didn’t worry about them.”

The teams had tied at the end of the championship with two match wins apiece, after Wilts beat Northants 5.5-3.5 and Yorkshire defeated Hertfordshire 6.5-2.5. But Wiltshire snatched the victory with 16 points from games won, while Yorkshire fell just short with 15.5.

At the start of the day, when all four teams were still in with a chance of taking the title, it was Yorkshire who made the first move. They won their foursomes against Hertfordshire 2-1, while Wilts and Northants shared the points. 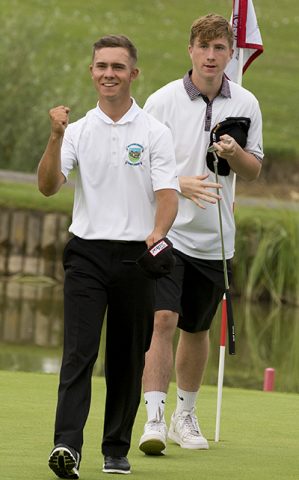 In the afternoon Yorkshire were again quick off the mark. Barclay Brown and Charlie Thornton both completed their 100 per cent scoring record of six wins from six matches with sub-par golf as they sped to wins of 5&3 and 7&6 respectively. Sam Bairstow soon followed them, winning 3&2.

Then the tension began to mount as players and spectators concentrated on the calculations. How many more could Yorkshire win? What were Wiltshire doing?

The quality of the afternoon’s play was underlined when Charlie Daughtrey – who had been down all through his round – managed to win the last for a half, having scored around seven-under par. Finally Tom North holed a testing six-footer on the last to win his game 1up and complete Yorkshire’s score. Would it be enough?

Wiltshire, though, had all the answers when it counted. James Cooper led the way with a solid 3&2 win and was quickly followed by Tom Stagg, who was seven-under par for the 12 holes required to defeat his opponent.

The next game to finish was critical. Jamie Cooper had been locked in a tight battle with Northant’s Fergus Robinson and for most of the round there was never more than one hole between them. They came up the last all square after Robinson birdied 17, watched closely by the Yorkshire team who had calculated this was the make or break game.

Cooper played textbook golf, hitting the green in two, while Robinson found sand with his tee shot and overshot the green with his second. Soon, the point was Cooper’s and he declared after his round of 18 straight pars: “I didn’t feel the pressure. I just thought hit another green and see what happens. I’m happy to do my part for the team.”

There was just time for the team to dash to the 16th green to cheer in Bolton as he completed their victory. He’d been in control for most of his match, moving ahead on the 7th and steadily increasing his lead.

Team manager Ian Welding was in tears as he told his side: “We don’t do things the easy way. This has been absolutely unbelievable and the whole team has been brilliant. Their team spirit has been fantastic and they have pulled for each other and supported each other. We had the belief that we could do it, even when it was nip and tuck and we were looking like we might come up short.”

For Yorkshire there was disappointment, but team coach Steve Robinson said: “I’m really proud of the way they performed and of their fighting spirit. None of the lads gave in and they believed they could do it and they have fallen just a half point short. But congratulations to Wiltshire, they are deserving winners.”