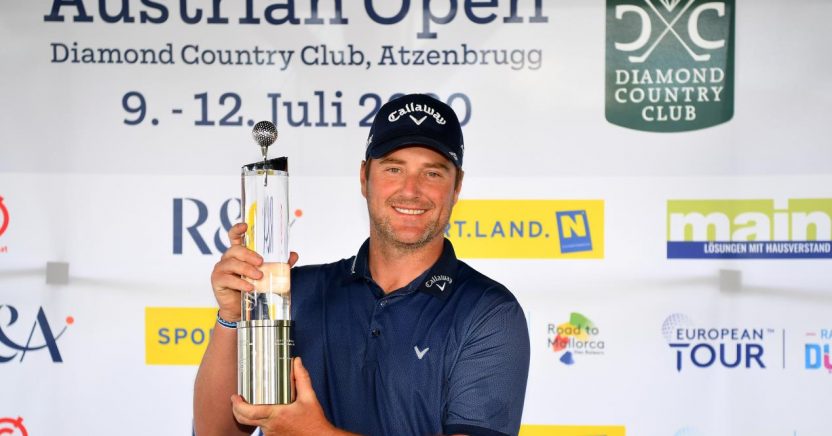 Marc Warren ended a six-year wait for his fourth European Tour title when winning the Austrian Open, as the European Tour and European Challenge Tour seasons restarted after a four-month break due to the global coronavirus pandemic.

The 39-year-old Scot, who last tasted victory at the 2014 Made In Denmark, started the final day at Diamond Country Club in a share of the lead with Germany’s Nicolai von Dellingshausen, but it was an enthralling battle with Spanish youngster Sebastian Garcia Rodriguez which he had to overcome to win again on the European Tour.

Garcia Rodriguez eagled the first to move to within one shot, and the pair shared the lead coming down the home straight until Warren made his sixth birdie of the day on the 17th. Germany’s Marcel Schneider made a run for the title with a three under par round of 69, holding the clubhouse lead on 12 under par while Warren stood on the 18th tee.

After Garcia Rodriguez hit his tee shot into the water, Warren needed just a par to secure his first title since 2014, which he duly converted from five feet.

Wil Besseling carded the joint-low round of the day, a six under par 66, to take solo third. While Garcia Rodriguez was joined by Scottish pair Craig Howie and Connor Syme, alongside Holland’s Darius van Driel on ten under par.

Warren said: “This a massive result for me. A few hours ago I didn’t have full status [on the European Tour], now to be in a winner’s category and be able to plan the year a little bit is good. I just need to keep doing what I’m doing, trying to hit one shape all the time and when I do play try and do that and try not to mess about too much.”

What’s in the Bag – Marc Warren