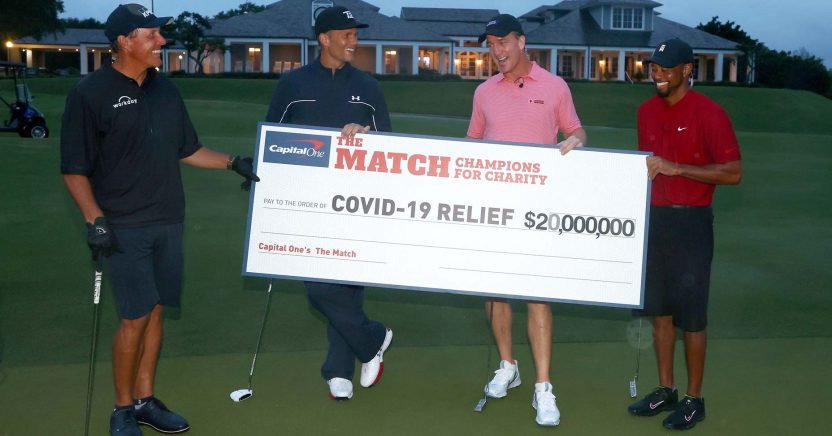 A pro-celebrity pairs match between Tiger Woods and Phil Mickelson, who teamed up with American Football stars Payton Manning and Tom Brady, succeeded in raising over $20m for Covid-19 relief charities.

The Champions for Charity Match, which was held at the Medalist Golf Club in Florida, was billed as something of a rematch of the big money game that Woods and Mickelson played in Las Vegas 18 months ago, but the presence of the two amateur players ensured that things were kept light-hearted, although Woods will no doubt have enjoyed winning this latest match 1up, thanks to some consistent driving and a few errors from his rival at crucial moments.

Shown on TV in the UK on CNN, the match was played in wind and rain, and almost darkness by the end, but both players appeared to enjoy their return to competitive action for the first time since the Players Championship was called off in mid-March.

While the two pros soon found their rhythm, Brady was a little less confident and barely connected with the ball until he produced a magnificent 100-yard wedge into the sixth green, which landed just beyond the flag and span back into the cup for a birdie. Brooks Koepka, who was watching the match, had to pay out a $100,000 donation to charity after betting with Brady that he wouldn’t make a par on the front nine.

The match was split into two formats, with the front nine being fourball betterball, while the back nine was a greensomes, with each player taking alternate shots after they chose the best drive. Brady’s miracle birdie inspired a comeback of sorts for him and Mickelson, as they were three holes down at the time, but they ultimately lost by one hole.

Woods, playing on his home course, looked to be swinging well and never missed a fairway during the course of the entire match, while Mickelson appeared a little more rusty, with his putter letting him down on more than one occasion, although he made a couple of clutch efforts on the back nine to keep the match alive.

Former PGA Championship winner Justin Thomas, who is currently fourth in the world rankings, was reduced to the role of on-course commentator for the match, while basketball legend Charles Barkley was part of the TV commentary team.

While sponsors Capital One made a $10m donation to the charity fund, a further $10m was raised by TV viewers who made pledges during the TV broadcast, to combine to raise $20m for a range of Covid-19 relief charities.