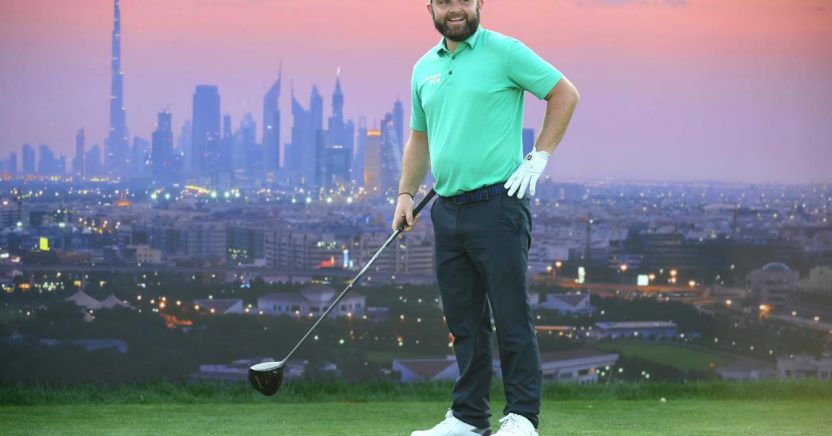 Andy Sullivan cruised into a three-shot lead at the halfway point of the Golf in Dubai Championship, where the Englishman’s 17 under total came close to breaking a new European Tour record for lowest 36-hole score.

The 33-year-old Midlander already has one victory under his belt this season, having won the English Championship in August by seven strokes with a 27-under-par total, and that score looks in danger of being beaten if he carries on in this vein.

Sullivan revelled in the low-scoring conditions once again on the Fire Course at Jumeriah Golf Estates, as he carded five birdies and an eagle to sign for a six-under 66 to add to his opening 61 – with his 17 under half-way total one shy of Ernie Els’s 18 under half-way total at the 2004 Heineken Classic.

That put some daylight between the former Ryder Cup player and his English compatriots Ross Fisher and Matt Wallace, who shared second place on 14 under heading into the weekend. Scotland’s Craig Howie, German Max Schmitt and Antoine Rozner of France were all two strokes further back.

Speaking after his round, Sullivan said: “I spoke to my psychologist before I went out about staying patient and giving myself as many chances as possible. I really had to work hard at staying patient. When I was three under through nine it didn’t feel as good as yesterday, but I knew I was still on the right track. I knew I was swinging it well, and if I could keep giving myself opportunities I could make a few coming in. If you’d told me I’d shoot 61, 66, I’d have snapped your hand off.

“My processes were really good. I was seeing the lines really well. Pace was a bit firm today and I hit a few a few feet by, which is why I missed on the high side a few times, but I feel like I’ve got the golf ball under some sort of control at the moment. I know what shapes I can hit and how much I can move it. It just feels really comfortable out there off the tee and into the greens, it feels like there aren’t many pins I can’t get at, which is a nice feeling to have. It didn’t happen too often in the season, so it’s nice to have that.”