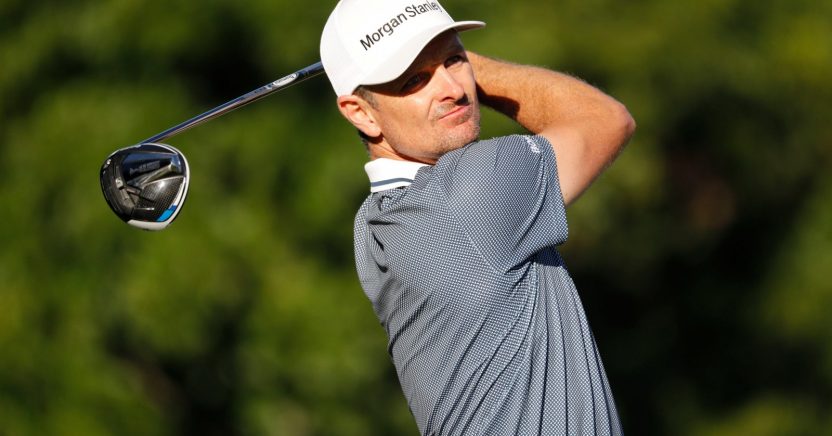 Justin Rose took a share of the first-round lead at the Charles Schwab Challenge in Texas as the PGA Tour returned to action for the first time since mid-March.

The former world No.1 fired a seven-under-par 63 at Colonial Country Club to tie with American Harold Varner III at the top of the leaderboard as golf returned under tight Covid-19 controls.

With no fans allowed in, the fairways were eerily quiet as the players went about their work while ensuring that they followed the strict 2m social distancing rules – although there were the occasional lapses, with several players first bumping fans and signing golf balls as old habits proved hard to forget.

The tournament got off to a sombre start, with the early players observing a minute’s silence at 8.46am in memory of George Floyd, the African American who died in police custody two weeks ago and whose funeral took place in nearby Houston just two days earlier.

Varner III, one of the few black American players on the professional circuit, birdied his first two holes and was four under after nine. He then birdied the 10th and 12th, but missed opportunities to join Rose at the top of the leaderboard before holing from 10 feet on the last.

Rose, who won this event in 2018, started on the 10th hole and chipped in from the edge of the green with a fairway wood to open with a birdie. He was four under after seven, then had a run of three birdies from the first (his tenth) before finishing with six straight pars. Speaking after his round, Rose said: “The good thing is I feel like I didn’t max everything out today. Yes, my short game was good, my putting was good, but I feel like there’s another level there or another gear or two with the long game.”

The showcase grouping of Rory McIlroy, Brooks Koekpa and Jon Rahm saw the Northern Irishman and the American fire matching 68s, with McIlroy suffering a frustrating day as his putter went cold on the back nine with nine straight pars to finish. Rahm shot a 69 to keep tabs on his rivals.

Justin Thomas, playing along Jordan Spieth and Rickie Fowler, fired a six-under 64, to sit one off the lead with Jhonattan Vegas, Abraham Ancer and Collin Morikawa. Spieth, who has fallen to 56th in the world rankings, is one of nine players a shot further back on five under, but Fowler had four bogeys in his final five holes to fade to three over.

Among the UK contingent, Ian Poulter posted a 66, Matt Fitzpatrick joined McIlroy on two under, Graeme McDowell is one under, Matt Wallace is on level par after carding a 70, while Danny Willett shot a one-over 71.

Other highlights from the opening day of top-flight men’s golf’s return to action included South Korea’s Sung Kang ace at the par-three 13th, which was greeted with deafening silence and no high-fives with fellow players or caddies.