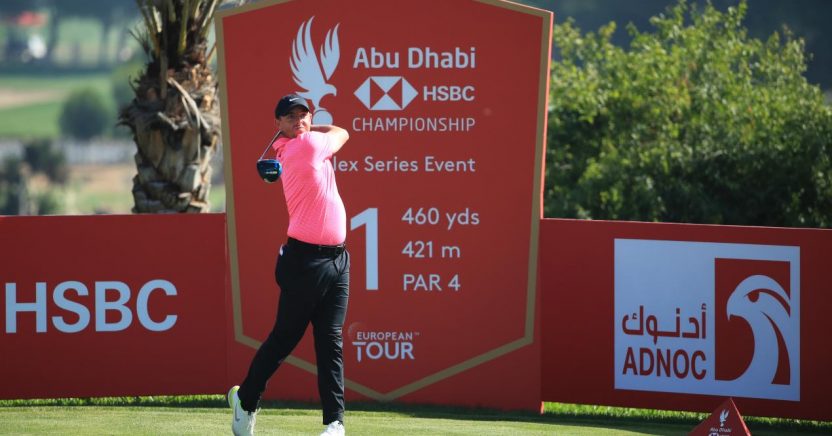 Rory gets off to a flyer in Abu Dhabi
News

Rory McIlroy got his season off to the perfect start as the Northern Irishman carded a stunning eight under 64 in the opening round of the Abu Dhabi HSBC Championship.

The four-time Major winner is still chasing his maiden victory at the tournament, despite a record which includes four runner-up finishes, three third place finishes, a top five and a top 15. But his opening 64 was his lowest ever round in 11 appearances at Abu Dhabi Golf Club.

McIlroy carded two birdies in the opening three holes, having teed off at the par-five tenth, which he duly birdied, and coasted to six more in a flawless round which left him one stroke clear at the top.

Leading the chasing pack was Tyrrell Hatton, who signed for a seven under 65, which included a pair of eagles in his first nine holes – opening his account for the season with a three at the tenth before picking up another eagle at the ninth.

Fabrizio Zanotti was a shot further back on six under, while Romain Langasque and Rafa Cabrera-Bello shared fifth place on five under. Defending champion and reigning Race to Dubai champion Lee Westwood opened with a three under 69.

McIlroy said: “I knew 65 is the best I’ve shot here and I’ve shot it a few times, so I thought let’s try to go one better on the next nine and I was able to do that. Maybe played slightly better on our front nine, but I holed some really nice putts coming in for birdies. A lot of it was very good. I felt like I drove the ball well for the most part, a couple of swirly ones in the middle of the round. Distance control was really good. I also hit a lot of nice iron shots, and honestly it was probably the best I’ve putted these greens in Abu Dhabi in my whole career. And I’ve always struggled to read the greens here, but I sort of got my eye in early and kept going.”

Play was delayed by three hours in the morning due to fog and then suspended due to darkness with round one set to restart at 7.40am on Friday morning. Justin Rose was on three under for his round after 11 holes when play was halted for the day.