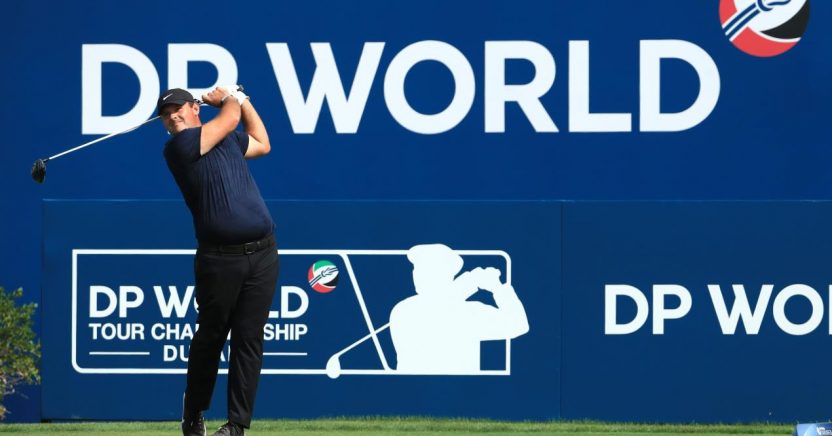 Patrick Reed remains in pole position to win the Race to Dubai after he birdied the closing hole at Jumeirah Golf Estates to join English pair Laurie Canter and Matt Fitzpatrick in a three way share of the lead going into the final round of the DP World Tour Championship, Dubai.

Reed followed a miraculous par save on the par three 17th – where he got up and down after his tee shot avoided rolling into the water by a matter of inches – before holing a six foot birdie putt on the 18th for a round of 71 to join playing partner Fitzpatrick on 11 under par.

Canter, playing in the group ahead, had minutes earlier set that clubhouse target with a round of 68, and Fitzpatrick matched it with a tap in birdie on the last for his 68 as the 2016 DP World Tour Championship winner kept up the pressure on Reed, the Race to Dubai leader.

Westwood posted four birdies in six holes immediately after the turn in his second consecutive round of 68 to remain firmly in contention to win the Harry Vardon Trophy for a third time, 20 years after he first lifted it. The former World Number One is joined on ten under par by Scotland’s Robert MacIntyre (66) Spain’s Adri Arnaus (67) and Viktor Hovland (66), the Norwegian who is bidding for a maiden European Tour win to add to his second PGA Tour title, won at last week’s Mayakoba Golf Classic in Mexico.

Speaking about his third round performance, Reed said: “It was sloppy. I didn’t really hit the ball as well as I needed to. Made some putts, but didn’t make the putts also I needed to. It was one of those days I had to lean a lot on my short game, and the good thing is I was able to do that and put myself into position to still have a share of the lead going into tomorrow. I’m trying not to really think winning the Race to Dubai. If it happens, it would be unbelievable. It was always a goal of mine obviously to win golf tournaments but to win this one and also to win the Race to Dubai and be the first American would be amazing. We’ve got a long day ahead of us tomorrow. We still have full 18 holes left and you can’t really sit back there and think as much about that as just stay in the present and try to play some good golf tomorrow.”

Fitzpatrick said: “It was just a solid day, really. I just limited the mistakes on the hole and didn’t necessarily give myself too many chances, but the most important thing was I kept myself in touch with the guys at the top and nice birdie on the last to finish.It was vital. For me I want to be in the last group going into Sunday. It’s the place to be. Obviously you get a better picture of everything in front of you, you have a bit more time than everyone else. To make that final birdie and get in the last group tomorrow is ideal.

“I think I was 16th in the Race to Dubai at the start of this week, so winning it wasn’t really on my radar. I’m realistic about these things. I knew I needed a lot of results to go my way, and I need to play well myself. I was just concentrating on me playing well and if the rest takes care of itself, then happy days.”