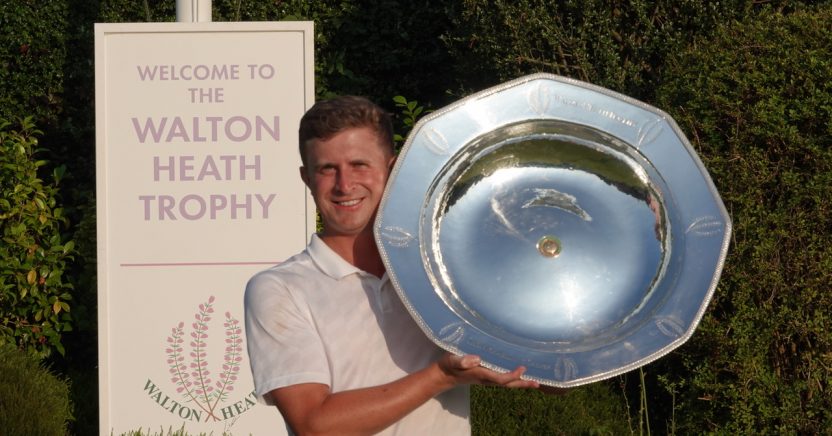 Rhys Nevin from Cheshire took a mighty step towards emulating fellow Englishman Tom Thurloway when he streaked clear of a top-class field to claim a record victory in the 2021 Walton Heath Trophy over the sun-drenched Surrey venue today.

Three years ago, Thurloway captured the Walton Heath Trophy in impressive style before going on to win the English Amateur Championship at Formby the following week.

Now 23-year-old Nevin, who was grinning like an excited Cheshire cat following his tournament record 18-under-par total of 270 over the formidable Old and New Courses, will head to the ‘English’ at Moortown in Yorkshire next week bidding to follow in Thurloway’s footsteps.

By coincidence, Nevin was Thurloway’s playing partner in the final pairing in 2018 but inexperience on that occasion saw him shoot 82 in the final round. However, he did enjoy a ringside seat of the new champion’s calm demeanor as he claimed the Michael Lunt Salver and clearly had no intention of missing out this time around.

With four rounds in the sixties, Nevin was able to cruise to a six-stroke win from Joe Sullivan of Royal Ashdown Forest Golf Club, who closed with a fine round of 67.

Nevin, an All-American at the University of Tennessee before graduating in politics and sociology this year, saved his best for last with a 66 over the Old – the best score of the final round – to add to his earlier 67,68 and 69 to show his rivals a clean pair of heels.

“This is a very special day,” declared Nevin, from the Sandiway club. “It’s rare that everything comes together but this week it did and to create the scoring record adds to the sense of satisfaction.

“I’ve always enjoyed playing here. It is one of the best amateur tournaments in the country and I love both courses. The trophy itself is impressive and there are a lot of people who won it before me who have gone on to achieve great things. That makes me very proud.”

Nevin added: “I am going to savour this for a few days before going to the English Amateur. What Tom did three years ago was amazing and he’s a great player. I think watching how he managed the closing holes here in 2018, with the pressure and a lot of Members out on the course, helped me today. I knew what to expect this time.”

East Sussex’s Sullivan laid claim to the runner-up berth thanks to a spectacular pair of back-to-back eagles at the 13th and 14th in a fourth round 67. Dan Bradbury of Wakefield finished third one stroke behind Sullivan on 277 while Harvey Byers delivered a strong display for the host club by securing a tie for 10th, helped by a third round 66 over the New.