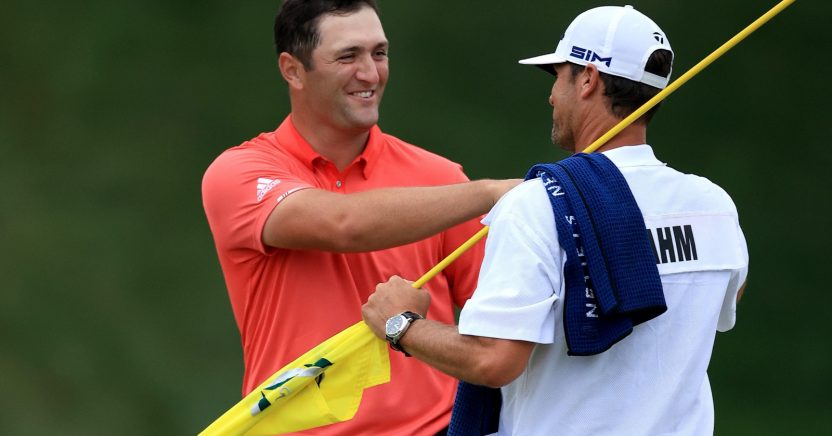 Jon Rahm replaced Rory McIlroy as the world number one golfer after winning the Memorial Tournament by three shots at Muirfield Village in Ohio.

Rahm started the final round with a four-shot lead, and had extended it to eight shots by the eighth hole following two early birdies. However, a double bogey at the 1oth, where he found trouble off the tee, seemed to unsettle the fiery 25-year-old Spaniard. His lead was cut to four when Ryan Palmer birdied the short 12th, and then just three after Rahm bogeyed the 14th.

He also looked in trouble on the par-three 16th, after his errant tee shot flew into the greenside rough, but he hit a delicate chip that rolled right into the centre of the cup for a birdie, and that looked to have effectively sealed the deal. However, TV footage showed that Rahm had inadvertently moved his ball while addressing it, and was later penalised two shots. However, that was not before he had parred his final two holes and won by five. The penalty, which was issued after he has signed his scorecard, cut his winning margin to three.

“It was an unbelievable shot,” said Rahm of his chip on 16. “It was the best short-game shot I’ve ever hit. If the ball did move I did not see anything. It’s not going to take anything away from that shot. For that to go in, that was exactly what I needed.”

A three-over-par 75 was enough to win on nine under, three clear of Palmer (74), with Matt Fitzpatrick (68) third on five under, with fellow Englishman Matt Wallace (72) one back.

Speaking about his achievement in becoming the second Spaniard, after Seve Ballesteros, to top the world rankings, Rahm said: “I’ve accomplished a lifelong goal and any time I can join Spanish history with Seve is incredible.“

Fitzpatrick’s 68 was the lowest round of a day when the average score was closer to 76, and moved him 15 places up the leaderboard. “It was just a grind,” he said after an excellent round which featured one bogey and five birdies and was interrupted by a 50-minute delay as a storm blew across the course.  “Pars were a good score,” he added.

Wallace had three birdies in his final four holes, including one at the last to card a level-par 72 and take joint fourth with Jason Day.

McIlroy had an early birdie but a triple-bogey eight on the par-five fifth hole derailed his round as his reign as world number one finished with a six-over 78 and four over total.

Tiger Woods said he would take “a lot of positives” away from his first tournament in five months despite finishing with a four-over 76 and six over par total. The record five-times winner of this Jack Nicklaus-hosted event holed birdie putts of 18 and 22 feet on the 16th and 17th holes, but he also had five bogeys and a double bogey.