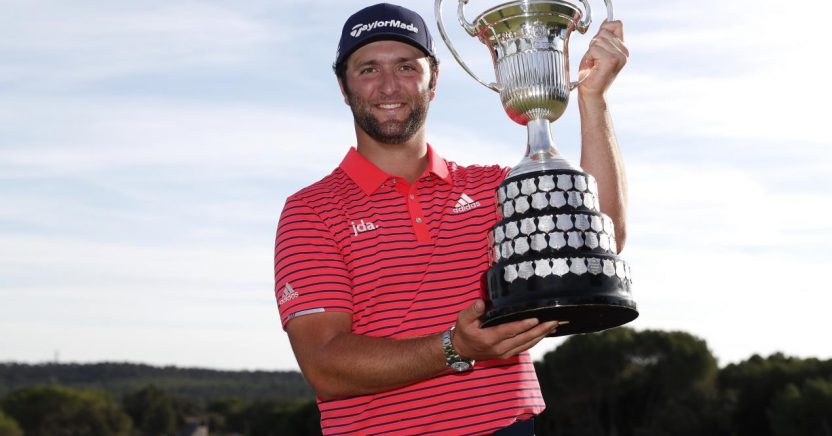 Jon Rahm delighted his home fans when storming to a five-stroke victory at the Spanish Open in Madrid.

The 24-year-old Spaniard, who also won the tournament last year, secured his fifth European Tour title in just his 39th start, surpassing the late, great Seve Ballesteros, who reached that milestone on his 49th appearance.

Rahm started the final round at Club de Campo Villa de Madrid with a five-stroke lead and quickly extended his advantage to seven after an eagle on the par-five fourth and two further gains before the turn. He signed for a tournament record-equalling 22 under par total after birdies on the tenth and 14th, finishing five strokes ahead of Rafa Cabrera Bello, who recorded his best result in his national open after birdieing five of his last six holes for a five-under-par 66.

Samuel Del Val, ranked 1,413th at the start of the week, rounded-out an all-Spanish top three as he signed for a closing 68 for a 15-under-par total. His compatriot Adri Arnaus continued his fine rookie year on the European Tour as he finished in a share of fourth with Danes Joachim B Hansen and Jeff Winther. Sergio Garcia was the fifth Spaniard inside the top five after his final round of 66 saw him share seventh with four others.

World No.5 Rahm, who moved to the top of the Race to Dubai rankings with the win, said: “I started getting comfortable around 13, after that the only tough tee shot for me was 14, because I have to hit a draw, and I’m not the best drawer of the ball with the driver and that was the only one I wanted to skip – but I almost made an eagle. After that I was trying to enjoy the walk – I’m not happy I three-putted 17, I wanted to go bogey-free.

“At the end of the day, I did the important thing – I was able to successfully defend my title. It’s always hard for me to keep things under control in front of a home crowd, but I can’t wait to come back next year and hopefully we’ll make it three wins.”

JON RAHM – WHAT’S IN THE BAG