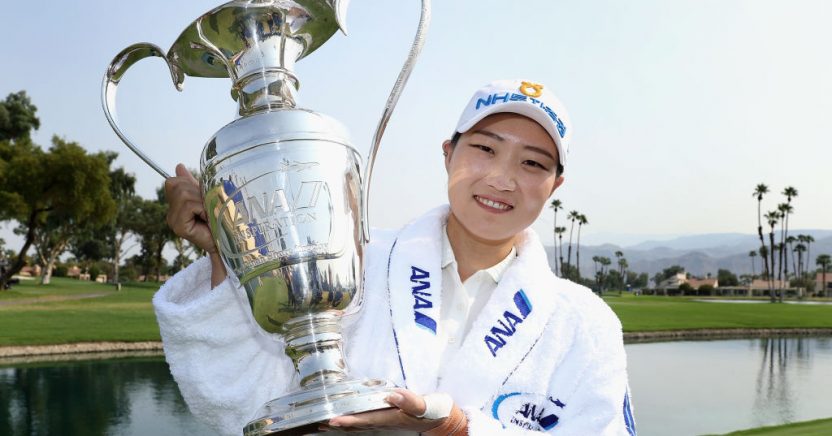 South Korea’s Mirim Lee won her first major title at the ANA Inspiration after a three-way play-off at Rancho Mirage in California.

The 29-year-old beat Nelly Korda and Brooke Henderson – who had tied for the lead after the third round – with a birdie on the first extra hole.

She shot a five-under-par 67 in the final round, including three chip-ins and an eagle on the 18th, to tie on 15 under during regulation play.

Victory marks world number 94 Lee’s fourth LPGA title and her first since 2017. Her previous best finish at a major came at the 2016 British Open when she tied for second.

Lee had been two shots off the pace at the start of Sunday’s final round in California, tied for third with Lexi Thompson and Katherine Kirk behind American Korda and Canada’s Henderson. Having already chipped in on the sixth, Lee found the cup from off the green on 16. However, with a bogey on the penultimate hole it looked like her chance had gone, only for her to produce more magic off the back of the green on the 72nd hole when she chipped in for eagle.

There was an element of controversy to the 18th hole, as the tournament organisers had erected a tarpaulin wall behind the green to represent where the grandstands would have been, which many players used as a back stop, knowing that if they flew the green with their approach they would be given a free drop. It allowed players to go for the green in two, knowing that they would only be faced with a short chip back onto the green from the drop zone.

Korda had led from the first round and hit six birdies in her final round, but none came on her last four holes – including missing a putt to win it on the last.

England’s Mel Reid finished tied for seventh on nine under – her best finish at the event – while Georgia Hall finished tied 37th on one under.