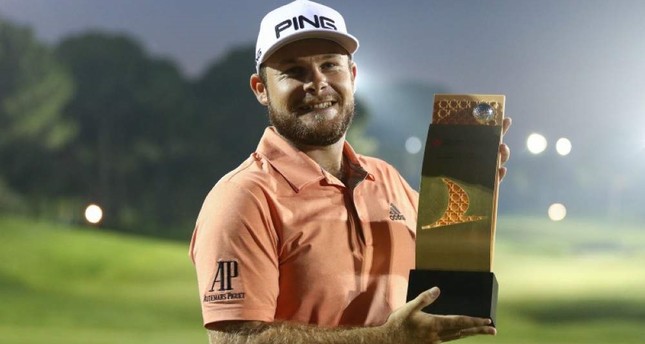 Tyrrell Hatton parred the fourth extra hole under the floodlights to win a dramatic six-man play-off at the Turkish Airlines Open.

The 28-year-old from Buckinghamshire edged out Matthias Schwab after Erik van Rooyen, Kurt Kitayama, Victor Perez and Benjamin Hebert had earlier fallen by the wayside.

It is the first time in professional golf that a play-off has been finished under floodlights after they were required on the 18th hole at the Montgomerie Maxx Royal in Antalya.

After the sextet all finished on 20-under par, they were split up into two groups of three for the play-off, with Van Rooyen dropping out first after driving into a bush on their first additional trip down the 558-yard, par-five 18th. Hatton made a sensational birdie, though, as he chipped in from off the green before Kitayama knocked in a routine four.

In behind, Schwab was the only one of the trio to make a birdie after Hebert and Perez found trouble down the right of the fairway.

Hatton, Kitayama and Schwab all missed birdie putts the second time around on the 18th and the floodlights were fired up for their third visit to the 18th tee as darkness descended. A wayward tee shot proved costly for Kitayama this time, but Schwab managed to rescue a birdie with a 25-foot putt after Hatton appeared to have given himself a winning birdie putt.

With the lights now shining brightly, Hatton missed a birdie putt at the 18th the fourth time around, but Schwab then tapped an even shorter putt wide for his first bogey on a par-five all week to hand Hatton the victory.

It was a hard way to lose out on a first European Tour win for Schwab as he had been out on his own at the top of the leaderboard virtually all day. After starting the final round three clear, the Austrian, whose putter failed to fire, carded a two-under 70 and was only reeled in late on as he was the only one of the play-off contenders to par the 18th in regulation.

American Kitayama completed his charge up the leaderboard by getting to 20 under with a birdie at the last for a 64, which was one better than South African Van Rooyen, who chipped in for a superb eagle at the last to snatch a play-off berth. French duo Perez, who also fired a 65, and Hebert (67) then both birdied the last, as did Hatton (67).

Hatton, who was claiming his fourth European Tour win and his second success in a Rolex Series event, picked up £1.57m for the win, which was his first since the Italian Open in October 2017.
He is due to undergo surgery on this wrist later this month, and is hoping to return to play in the Abu Dhabi Golf Championship towards the end of January.