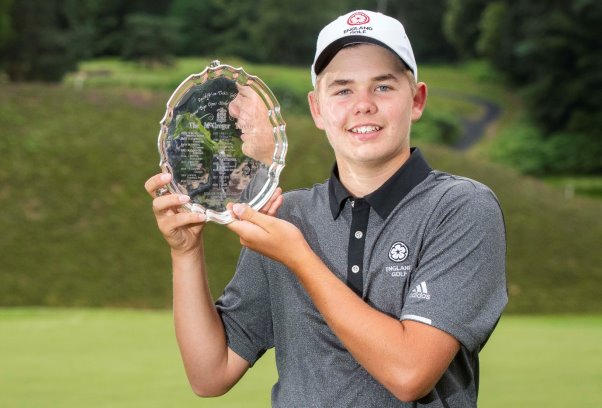 Essex’s Harley Smith admitted he was proud to follow in the spikemarks of past winners such as Justin Rose, Edoardo Molinari and Oliver Fisher after claiming victory in the McGregor Trophy, the England Boys U16 Championship.

The England boys’ squad player emerged victorious after a thrilling finale to the 72-hole stroke play event held at Camberley Heath Golf Club in Surrey. Rounds of 67, 66, and two closing scores of 69 gave the Rayleigh golfer a winning total of -13 and a one-shot victory from England team-mate Josh Berry.

Smith led wire-to-wire and showed no nerves to take top honours and emulate the achievements of past winners who have gone on to win a major, Ryder Cups or success on Tour. He said: “It’s lovely to know Tour players have won the same trophy as me. I’m very happy to win and how I performed. It feels amazing.”

However, the Essex golfer had to fight all the way for the silverware. At the halfway stage, the 16-year-old led by five shots from Luke Perkins from Rochester and Cobham. After today’s morning 18 holes, the gap was back down to two shots with Freddie Turnell (Burnham & Berrow) hot on his tail. By the time the leading groups had reached the turn, Berry from Doncaster was threatening an amazing comeback.

Playing four groups ahead of Smith, Berry looked like repeating or even bettering his five-under-par third round 66 to emerge from the pack Eventually, Berry closed with a round of 67 for a -12 total – with Smith edging clear thanks to three straight birdies from the 11th.

In the end, Smith knew a bogey-five at the final hole would seal the deal. His approach found a greenside bunker, but an assured splash from the sand and then two putts got him over the line.

“I kind of felt like I didn’t play my best in the morning,” said Smith. “But I knew it would be tough for them to shoot another good round with the wind picking up and the pressure of playing this event as well. I was proud that I did have four rounds in the 60s. It shows my consistency which I’ve been trying to work on these past few months.”

There were a number of notable performances during a tough 36 holes on the final day. Turnell carded seven birdies and an eagle in a blistering third round of 64 to move onto nine under par for the championship and an afternoon round of 70 saw him tie for third place with Hugh Adams on -10.

Adams, from Hagley, can be proud of his showing. His third round 65 featured seven birdies and just one bogey and another sub-par round of 70 in the afternoon gave him plenty of positives for the week. He said: “I’m disappointed at the minute but I’ll look back tomorrow and realise it was a strong week with good golf.”

It was also another impressive week for Gibraltar-based Sebastian Desoisa. After a top-ten finish last month at the English U18 Championship, Desoisa managed four rounds under par to finish on -9 and in fifth spot. He also claimed the Jean Case Memorial Trophy which is awarded to the highest ranked player aged under 15.