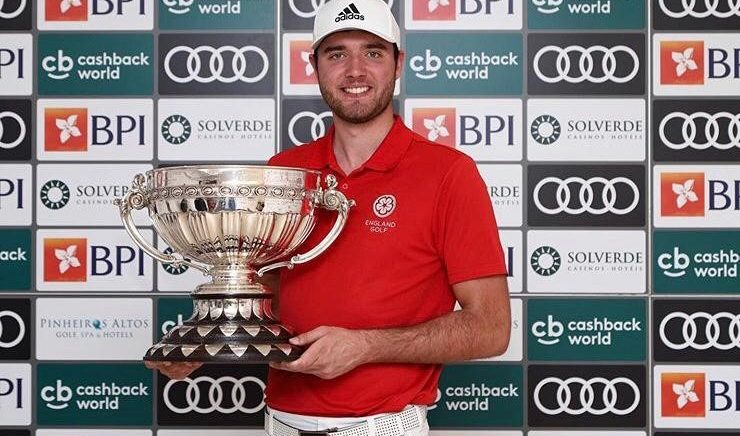 The England ‘A’ squad player carded a six-under-par final round of 66 to win the event by one shot from Spain’s Eduard Rousaud and Portugal’s Pedro Lencart Silva.

After opening up with rounds of 71, 65 and 67 to head into final 18 holes at Montado Golf Resort in a tie for third, Goddard was still in contention after a solid front nine, but thought he’d blown his chances of victory with back-to-back bogeys at 12 and 13. However, showing a steely resolve, he fought back with three birdies in a row from the 14th, and then a nerveless ten-foot putt for a birdie on the 72nd hole was good enough to earn the 20-year-old the biggest win of his career.

“I didn’t know at the time that my putt on 18 was for a win,” said Goddard, who plays his golf at Hanbury Manor. “I thought I would have to hole it to get into a play-off. But as it turned out my nearest rivals could only manage a par and a bogey at the last and my score was good enough to win.”

He added:  “I’m thrilled to get over the line. I had a chance to win the Lytham Trophy last year, but came up just short, and it feels as if a win has been a long time coming and is really special moment for me.

Goddard – a former England boys’ international – is part of the England men’s squad set-up for 2020 and hopes this win is a launch pad for his season. He added: “I hope I can kick on now and enjoy a really good year.”

Kent duo Joshua Bristow and Mason Essam also enjoyed a good week in Portugal – Bristow finished fifth on 14 under, while Essam was two shots further back in tenth.