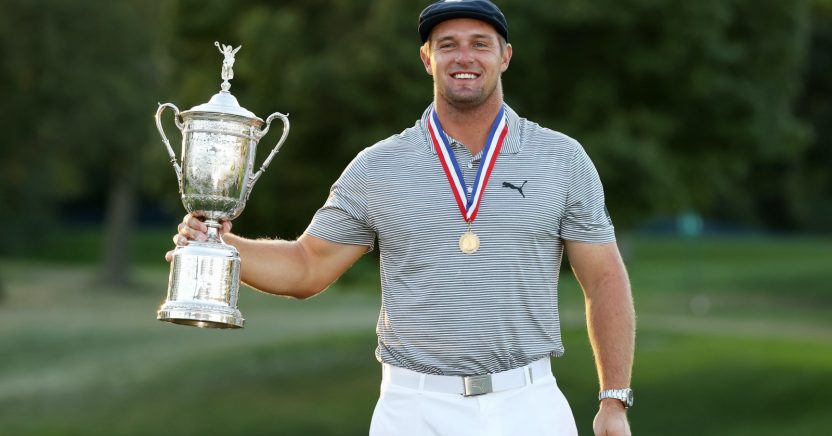 DeChambeau powers to six-shot victory at US Open
Featured News

American Bryson DeChambeau ushered in a new era for Major championship golf when producing a brilliant final-round display to win the 120th US Open by six shots and claim the first major title of his career.

The 27-year-old was the only player to break par at Winged Foot’s West Course on the final day and was the only player under par for 72 holes. Renowned for his big-hitting approach, the world number nine showed maturity and composure, and combining awesome power with the touch of a surgeon, to card an impressive three-under 67 to win on six under.

Matthew Wolff, who led DeChambeau by two shots after the third round, was unable to keep up with his fellow countryman and faded on the back nine, shooting a five-over 75 to finish second on level par. Louis Oosthuizen finished third at two over, while Harris English took fourth. Rory McIlroy, who started out the final round with hopes of winning his fifth major, finished 12 shots behind the winner in tied eighth after an error-strewn 75, while Lee Westwood was a stroke further back after a closing 72.

DeChambeau wiped out Wolff’s two-shot lead within four holes on Sunday. Wolff bogeyed the par-three third before DeChambeau rolled in his opening birdie at the fourth. When Wolff dropped another shot at five, DeChambeau was the sole leader. Both then bogeyed the eighth, to give the chasing pack brief hope, only to card a pair of eagles on the par-five ninth to effectively turn the back nine into a match play event.

Wolff, 21, who was hoping to become the first debutant to win the championship since Francis Ouimet in 1907, then dropped shots at 10 and 14, before a double-bogey at 16 sealed his fate and left DeChambeau to coast home to a six-shot win.

After lifting the famous trophy, DeChambeau said: “This one’s for my parents, it’s for my whole team. All the work, all the blood, sweat, and tears we put into it, it just means the world to me. It’s just an honour, it has been a lot of hard work.”

He added: “The ninth hole was when I first thought this could be a reality. I made an eagle, I had shocked myself to do that, and I thought ‘I can do it’. Then I said ‘no, you have to focus on each and every hole’. Throughout the back nine I kept saying ‘no, you still have three, four, five holes to go’, whatever it was. I had to keep focused and make sure I executed each shot the best I could do.”

DeChambeau’s unique methods have divided opinion since he turned professional in 2016. The former physics student’s experiments have seen him dubbed ‘The Scientist’, tinkering with oversized grips, cutting all his clubs to the same length and most recently piling on more than 40lbs in the past year. That helped turn him into the longest average driver on the PGA Tour last season and he said in the build-up to the US Open he would look to overpower the difficult West Course at Winged Foot. He did that in no uncertain terms, regularly hitting 350-yard drives that left him on the fringes of short par fours, little more than wedges into the longest par fours, and mid-irons into par fives.

DeChambeau only hit 23 fairways all week – the lowest in a major history since Angel Cabrera found 27 en route to winning at Oakmont in 2007 – a figure that will not only cause huge consternation at the USGA’s headquarters, but one that will inevitably lead to changes to the rules governing professional equipment in the not too distant future.