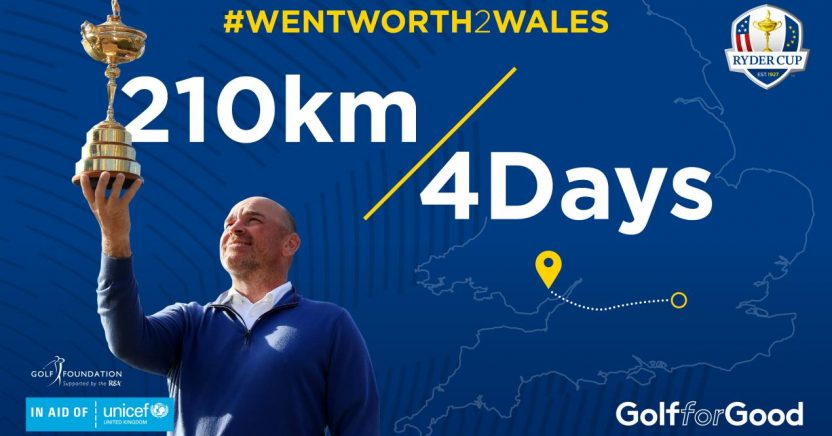 Bjørn to walk from Wentworth to Wales for charity
Featured News

tweet Share:
Former Ryder Cup captain Thomas Bjørn is set for one of the biggest challenges of his career next week when he embarks on a 210km charity walk from Wentworth Club in Surrey to Celtic Manor in Wales to raise funds for Unicef UK’s Save Generation Covid appeal and the Golf Foundation as part of the European Tour’s #GolfforGood initiative.
Inspired by the fundraising exploits in the UK of Sir Tom Moore during the COVID-19 lockdown, Bjørn will carry the Ryder Cup from the European Tour’s headquarters in Surrey to 2010 Ryder Cup venue in Newport, which will host two consecutive European Tour events as part of the new UK Swing.The 49-year-old Dane will set off from Wentworth on August 13, the first day of The Celtic Classic, and plans to arrive at Celtic Manor on August 16, the final day of the tournament. He will then compete in the second tournament to be held at the Celtic Manor Resort, the ISPS Handa Wales Open, on the Twenty Ten Course, where Europe memorably defeated the United States 14½-13½ ten years ago.

Bjørn will be hoping to raise money for Unicef UK and the Golf Foundation through the walk, while he also intends to raise awareness of the health and wellness benefits that can be achieved through golf.

“Like so many fundraising ideas, this all started as a throwaway comment which quickly grew into something which is now very real and, to be honest, quite scary,” said Bjørn. “During lockdown I had started going on some long walks to regain a bit of fitness, and also because I find it relieves a lot of mental stress for me. It was around the same time that Captain Tom, now Sir Tom Moore, was doing his incredible walk for the NHS and someone called me ‘Ryder Cup Captain Tom’. We had a bit of a laugh about it, but the more I looked at Sir Tom the more I was genuinely inspired by what he was doing, so we came up with the idea of doing a fundraising walk of our own.

“We looked at potential routes, and Wentworth to Wales made a lot of sense, although I have to admit I didn’t realise it was over 200km! It’s going to be very tough to do it in four days, but I suppose the whole point of doing it is that it’s not meant to be easy. If I am going to ask people to donate their hard-earned cash then I need to earn that donation. For me, walking between 10-12 hours a day for four consecutive days will push me to the limit.”

He added: “As a Dane who has lived most of my adult life in the UK, I wanted to give something back both globally and locally and I feel that UNICEF’s Save Generation Covid appeal and the Golf Foundation are a perfect fit for that. I was reading some information from UNICEF recently and they say that coronavirus is the biggest global crisis for children since World War II and that without urgent action, the coronavirus threatens to reverse 10 years of progress on reducing the number of children dying from preventable causes.

“And being able to raise some funds to help the game of golf continue to thrive as part of the European Tour’s UK swing and through the Golf Foundation is something that means a lot from a personal point of view. Obviously I want to raise as much as possible but no matter how much it is, hopefully it can raise awareness and help kids around the world.”