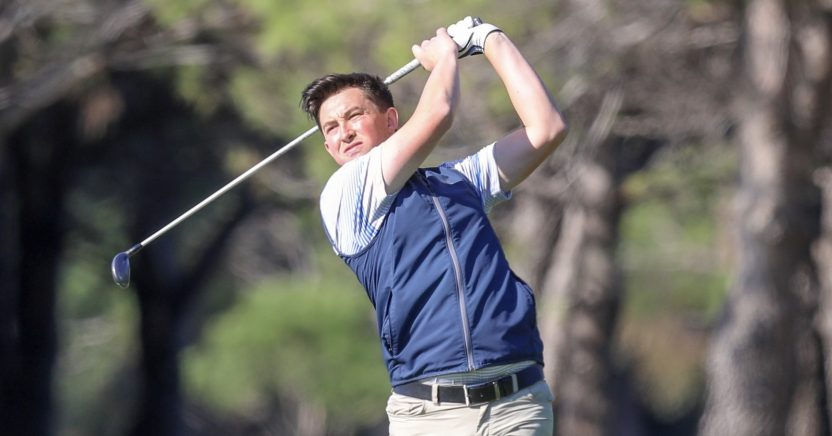 Rustington Golf Centre PGA Professional Michael Bullen had to produce what he described as one of the rounds of his career to deny Angus Mottershead outright victory in the PGA Kent Open.

The pair completed the two-round Stableford format event at Prince’s Golf Club locked on 78 points, each collecting more than £1,000 as a result of sharing the prize money allocated for first and second places and finishing as the leading trainees. In addition, Bullen won £200 for posting the best score in the second round.

And how he needed it after ending round one on 35 points, three adrift of his rival from Hampton Court Palace Golf Club.

Bullen, who is the reigning PGA Assistants’ Champion, followed up with a seven-under-par bogey-free round of 65 to ensure a share of first place. Both, however, were left with contrasting emotions regarding two holes on the second round.

Mottershead was left to rue a bogey at the par-five 15th, which ultimately proved costly, and Bullen was indebted to his seventh and final birdie at the par-four 18th for his share of first place.

Bullen went into the event having played in last month’s Betfred British Masters and, reflecting on his second round at Prince’s, said: “That was one of the best of my career. To go round here in seven-under is really pleasing.”

The 27-year-old was similarly enamoured by the course and added: “It’s one of my favourite links courses, so it was nice to do it justice in round two. It was in awesome condition and in really good shape. After lockdown I was begging to get back to playing somewhere good and this was perfect.

“They’ve made a few changes – for the better. And I was lucky enough to play with Ronan (McGuirk, a PGA Assistant at Princes). He talked me through the changes on the course and their plans, so that gave me a good insight.”

Bullen and Mottershead finished a point clear of Matt Ford and Jordan Godwin. And despite Bullen’s birdie bonanza in the second round over the Dunes/Himalayas loops, Mottershead upstaged him in terms of sub-par scores in the tournament by recording 11 birdies and an eagle. Neither, however, could emulate Godwin who delivered the shot of the day in the first round over the Shore/Dunes loops when he ‘aced’ the par-three 17th.