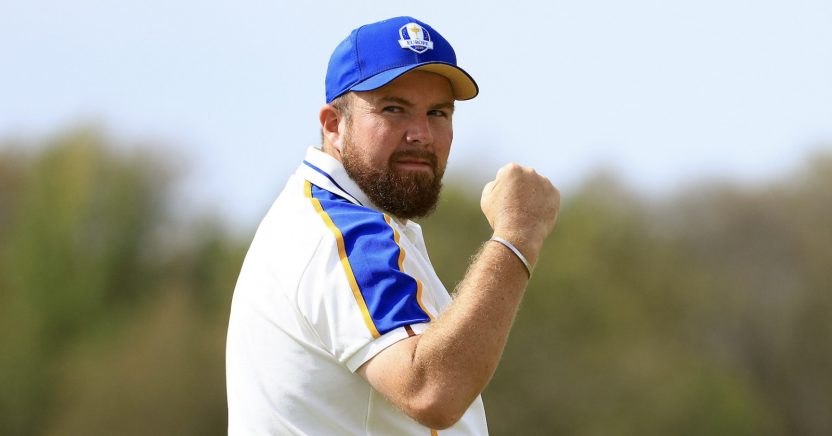 After being on the receiving end of a barrage of abuse from the US fans, Shane Lowry reflects on his Ryder Cup debut at Whistling Straits and reveals what he learned about himself from his wild week in Wisconsin

Six weeks or so has passed since the Ryder Cup and the dust has somewhat settled. Looking back, what is your reaction to the result, your performance and the overall experience?
More than anything, I was really disappointed for Padraig [Harrington]. I don’t think he deserved the beating we got. It looks bad on paper, obviously, but it wasn’t anything that he did wrong, we just didn’t perform as a team for him.
As a rookie, I didn’t really know what to expect, but it was everything I had imagined and more. Honestly, it was the most amazing week of my golfing career. It was one of the best experiences of my life, and it’s the only thing I want to focus on for the next two years. I don’t care what else I do, as long as I’m in the team in Rome and get the chance to try and win the cup back.

You seemed to come in for a bit of personal abuse from the American crowds at Whistling Straits. What was that like to experience on the golf course?
I don’t really care what people think about me to be honest, so I didn’t think it was that bad until I asked my wife what it was like for her, and she told me that they had experienced abuse while walking around the course as well.
So, that’s not very nice, and it’s not very nice for them to have to listen to me taking some flack. But that was only a small percentage of the crowd. After I finished my singles match on Sunday and I was walking back to follow the other groups and I got a huge ovation off the crowd and in the grandstand on 16, which was pretty cool.
I thought I got on well with the crowd as best I could, but they are obviously a home crowd, and they were always going to be partisan. But some of the stuff that was said to us and to our families was not very nice. But look, that’s just the way it is. Some people are idiots, especially when they’ve had a drink. Nobody turns into a genius drinking, and that’s what they were doing last week. Especially if you were out in the afternoon matches, it was loud.
At the start of the week, I was thinking ‘this is a bit mad’ as you’re being booed all over the shop, but as the week goes on, it does get rather annoying, especially when you’re getting beat.
As a team it was hard for us to perform to our best because no matter what you say, if you stand up and hit a 3-iron into ten feet from 250 yards and you don’t even get a ripple of applause, in fact, you even get booed for it, it’s hard to take. But I tried to take it as best I could.
I think I performed okay, but it is what it is. I don’t think it’s going to be like that in Rome. We will obviously have the home support, but we’ll be hopefully winning a bit of a different way.

There was much given away by either side when it came to putts. Did that surprise you at all?
Yes and no. It becomes a bit of vicious circle when players stop conceding short putts. For a start, the putt that Bryson Dechambeau made such a fuss about was at least four feet, so that was definitely not a gimme. Justin Thomas did the same thing to me and then I did the same thing to him purely because he did it to me and so it goes on. They made me hit a putt from literally 18 inches on the first hole, so I did the exact same thing as Thomas did just because I was annoyed with the picture I’d seen of him that morning with the beer cans.
The problem was that every time an American putted inside six feet, I was getting booed if I didn’t give it to them. They obviously played up to the crowd.
When I was playing with Tyrrell [Hatton] on Saturday afternoon and he wanted to give them a couple of balls and I said ‘no, let’s just let them see the ball in’. It was a bit of gamesmanship from me as well.  I was trying to annoy them and get in their heads, but it obviously didn’t work, did it?

Is there anything you can tell us about what went on in the team room on Sunday night?
Everyone was obviously very disappointed, but we all got together in the team room and we tried to celebrate as a team, even though it wasn’t the week we would have liked. The party, such as it was, ended up in the European team room. It’s always most fun in there. We had a few drinks and chatted about the week. It was nice. A lot of the Americans were in there too and my dad was in there too, which was nice for me as I hadn’t seen in all week. It was a good night, although not the night that many of us were imagining or, shall I say, hoping for.

So much is made of the European team’s cameraderie. Did you make some new friends that week?
I knew all the lads pretty well anyway, but we definitely became way closer over week and we really used that and we felt that we needed each other. I created friendships that I didn’t think I would. [Bernd] Wiesberger and [Victor] Hovland are such great lads in the team room and hopefully I’ll be on Ryder Cup teams with them for many years to come.

Did you ask to go out early behind Rory in the singles?
I knew that I wanted to play in one of the early matches, but I didn’t specifically ask to. We got the draw sent through to our phones and I was the second match on course. I knew Rory would be the first out, but I expected to be maybe fourth as I thought that Sergio Garcia and Rambo [Jon Rahm] would be two and three. One of the reasons Padraig put me and Rory back-to-back was to try and keep whatever Irish support we had together out there. There might’ve been literally 100 or 200 Irish people there, but other than that there was nobody from Europe, so that might have been his thinking.
Paddy obviously had a lot of faith in me, and I’m sorry that I wasn’t able to deliver for him. I didn’t do my job. I tried my best, and played some good golf, but just didn’t hold any putts. I was very disappointed after the match. I had a run where I lost four holes in a row, but I got it back. Then Patrick [Cantlay] birdied 14, 15 and 16 and put me away. It was one of those matches where I was playing one of the most in-form players in the world and I needed everything to go my way and it didn’t.
Rory won his match, L lot mine and then Rambo and Sergio both got beaten quite easily, and we were behind the black ball after that.

Of the all the European team, you perhaps seemed to get pumped up the most when you won a hole. Was that something that you had planned or did the emotions just get to you?
At the start of the week, I promised myself that I wasn’t going to get caught up in the fist pumping or celebrating from the Americans, if I do something good, I’m just going to tip my hat. The crowd weren’t going to cheer for me.
I swore live on TV accidentally, that’s not me! I don’t do stuff like that, but the emotions were just through the roof and it just all came out. In my own head, I was trying to send a message to my team that we had to keep fighting and keep going.
My personal highlight was playing with Tyrell on Saturday afternoon. I had a great time on the course with him, and thought we were a great team, great partnership and even managed to win our point.

What do you think the fall out will be from the defeat?
There’s bound to be a bit of a fall out over any defeat, never mind the margin, and I’ve read a couple of things where people are picking apart Padraig’s captaincy, but I think he was a great captain. He took that job on and it was always going to be a really hard task playing away from home, but we, as players, didn’t perform for him. But he’ll be fine. In my opinion he’s one of the greatest European players ever to play the game and that won’t change.
It’s something that will be disappointing for him and it would’ve been nice if it had gone better, but it is what it is. He’ll be back playing his own golf soon enough and life will move on. We’ve got a solid group of players and some youngsters coming through so we’ll be ok. The Ryder Cup has always had its ebbs and flows and that’s the beauty of the competition.