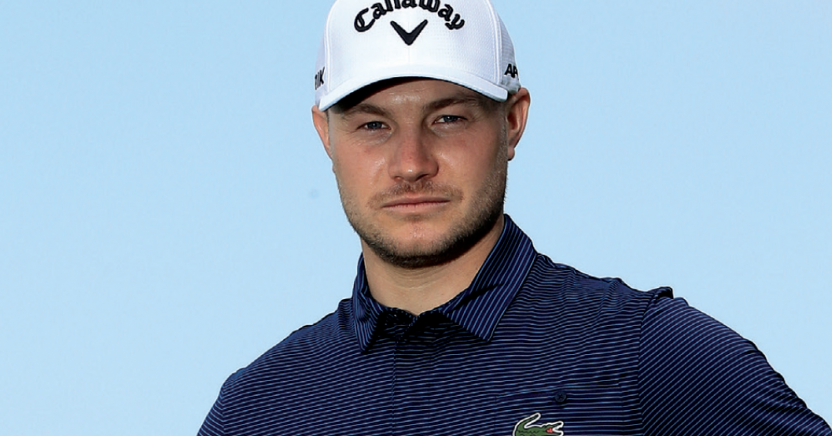 Oliver Fisher hit the headlines 18 months ago when became the first player to break the magic 60 barrier on the European Tour, but life on tour hasn’t always been smooth sailing for the man who was tipped for greatness when he turned pro 14 years ago

While few professional golfers would like their career to be defined by 18 holes of golf, Oliver Fisher is a name that is sure to pop up in pub quizzes in the years to come should ever the subject of record-breaking rounds of golf come up.

After 46 years, and over 690,000 rounds of golf, the European Tour finally got its ‘Mr 59’ when Fisher skipped round the Victoria Course at the 2018 Portugal Masters in 12 under the card. It wasn’t good enough to achieve a much-needed win, but it helped him make the TV evening news bulletins and earn a place in golfing history.

There had previously been 19 rounds of 60 on the European Tour, starting with David Llewellyn in 1988, and with the most recent coming from Brandon Stone at the 2018 Scottish Open, but no-one had managed to breakthrough to the magical fifties. That the heroic feat should have fallen to Fisher, who, at 30, and with just one tour win to his name – and a world ranking of 265 – shows the fine line that divides those who toil away in the mid-division of professional golf and those who float along in the rarified atmosphere of the world’s top 50.

Although blessed with a rare talent, Fisher, now aged 31, has certainly had to toil to earn his spot in golfing history. When he turned pro in 2006, at the almost ridiculously young age of 17, he seemed to have the golfing world at his feet. In claiming fifth place at that year’s European Tour Qualifying School – where he played as an amateur – he became the youngest British player to ever win a card to play on Europe’s elite tour. Unable to buy a beer and probably not in the possession of a razor, let alone a driving license, Fisher was precociousness personified.

Coached by Crowlands Heath’s club professional Chris Jenkins since the age of nine, Fisher had star quality stamped on him from the moment he lifted his first cut-down driver. Representing his club (West Essex), county (Essex), and country (England) at all levels, the Chingford-born youngster rose to wider fame when winning the Faldo Series Final in three consecutive years from 2003-2005, bringing himself to the attention of the six-time major winner in no uncertain fashion, and in the process cementing a relationship that has carried on to this day.

After winning the Essex Men’s Amateur in 2004, aged 15, the following year he became the youngest ever Walker Cup player, where he went unbeaten in his two singles matches in a narrow 12.5-11.5 defeat for GB&I. The professional game could wait no longer, and Fisher’s first full season on tour in 2007 was a tough challenge, but one he rose to admirably, finishing a respectable 76th in the European Tour’s Order of Merit. Jetting all over the world in search of starts took its toll, but it was all money in the mental bank, if not the one on the high street.

The following season he began to turn that promise into results, and came agonisingly close to claiming his first victory at the Open de Andalucia. After tying the lead with Thomas Levet over 72 holes, the pair went into a sudden play-off. Fisher chose to hit what he hoped would be a conservative 3-iron off the tee on the dangerous 18th hole, which featured water down the right-hand side, but the adrenalin coursing through his veins led him to flush it off the middle, and he watched in horror as the ball bounced through the fairway and into the lake. The wily Levet took advantage to claim his umpteenth career title, while Fisher was left to rue a missed opportunity.

Unbowed, he finished 51st in the money list in 2008, and looked set to solidify his place as a regular on tour. But then, in 2009, he inexplicably crashed. A total of 21 missed cuts saw him lose his card in a flash, and, after struggling at Tour School, he fell back to earth, and the Challenge Tour, with a bang. It was a lesson – if it needed learning – that nothing in golf is guaranteed.

“There are players like Rory [McIlroy] who have glittering amateur careers and move straight into glittering professional careers, but you have to be realisitic,” says Fisher. “It’s not something that happens very often. Myself, I have my share of hiccups.”

The reason for Fisher’s ‘hiccup’ back in 2009 was actually rather straightforward. Respected coach Pete Cowen was approached at The Open that year to have a look at Fisher’s swing, and was shocked at how bad the young man’s technique had become. “He’s a tremendous player, but unfortunately he was going down the wrong road, and the harder he worked the worse he was getting,” Cowen said at the time. “There’s nothing more soul-destroying than that, but I think it was a case of misinterpreting information, rather than getting wrong information, and he had to understand what he was trying to achieve.”

Most of the re-building of Fisher’s swing was done by Mike Walker, one of Cowen’s assistants, and a rise of 170 places on the world rankings in the following six months told its own story. He bounced back in 2010 by finishing 81st in the money list. But then the wheels fell off again. He missed another 20 consecutive cuts from the end of 2010 until August, until, from completely out of the blue, he popped up to win the Czech Open – making only his fourth cut of the year in the process. With €250,000 in the bank and a two-year exemption secured, Fisher could set about getting his career back on track.

It’s a measure of Fisher’s popularity that there wasn’t a more celebrated winner on the European Tour that year. His victory was greeted with a good deal of backslapping from players and caddies alike, and the Champagne that doused him on the final green was drunk in even more quantities in the bars of Prague later that night, as the tour made its way back to the airport. Some even missed their flights home as the celebrations ran long into the night.

Fisher’s popularity is a much to do with his refusal to moan about his misfortune during those dark days and the positive attitude he has showed in the face of such adversity.

“Having got my card at the age of 18, it’s fair to say I had very different expectations to what I have subsequently achieved,” he says. “I would certainly have hoped to won more than one tournament, but it’s a tough school out here. Every week there are 150-odd losers, and you quickly realise there’s an awful lot more goes into doing well out here than simply hitting the ball.

“It took me a while to get to grips with all that’s involved in becoming a good player. There were times when I was way too hard on myself, always looking to change things in the search for perfection, and it only made things worse. So these days I’m working on some different things to try to make myself better, and to score better – that’s the main thing.”

Although he confesses to having thought about giving it all up during his lowest ebb, golf is pretty much all he knows, so there was nothing to fall back on – there was no Plan B. “The more I thought about it, the more I realised there was nothing else I could do,” he says. “It was a terrible time. There I was, working my butt off, and asking myself over and over, “Why isn’t anything happening?”

The answer was to believe in his abilities, and to trust that the spark that Faldo, and so many other knowledgeable observers had seen during his early career, was still there.  After retaining his card through 2014 and 2015, he kept his card by the skin of his teeth at the end of 2016, bagging a top-ten finish at the season-ending Portugal Masters to secure his playing rights for 2017 at the very last gasp. 2018 was a much more consistent season, with 21 cuts made form 27 events and a respectable 84th on the money list, while last season was more of a struggle, with 15 missed cuts from 28 events, but a runner-up finish in the Qatar Masters in March, where he was pipped to the title by Eddie Pepperell, all but sealed his card for the season in a single week.

Having been knocking around the pro circuit since 2006, Fisher is hoping that his time at the coalface will soon start to pay off. And with a new set of clubs in the bag following his signing of a new equipment contract with Callaway, he certainly feels that he’s got the tools, both mentally and physically, to do the job. “Having a brand as strong as Callaway come for me has been a real boost to my confidence, and I’m really impressed with the clubs that I’ve got in my bag. I feel like I’ve got an awful lot to look forward to, as I’ve built up all this experience and I’m still only 31. The most important thing is where I want to go, not what’s in the past.

Having got married at the end of 2018, Fisher is enjoying the second stage of his career with a new-found balance in his life. “If you look around the tour there are some guys that have been knocking around for over 25 years, so you’ve got to find ways, not so much of reinventing yourself, but ways of keeping things feeling fresh,” he says. “I’m now in my 14th year, and although I’m certainly not one of the young guys any more, I still feel like I’ve got plenty of miles left on the clock and still feel hungry to compete, and I certainly don’t feel like I’m on a treadmill or a conveyor belt.

“I like to think I know myself better as a person and as a player, and I know where I’m at with my game, what I need to work on, and how to cope better mentally with certain situations. I’m less hard on myself when things don’t go my way. Ultimately, I know my job.”

He adds: “It’s certainly a great time to be on tour, with all the new opportunities to play and the great crop of exciting new players that keep pushing you on to raise your own game. I may not have achieved as much as many people thought I might have at this stage of my career, but I’m proud of the fact that I’ve competing at the top level of the game for the past 13 or 14 seasons, and that I’ve only lost my card once during that time. A lot of the guys I grew up playing golf with never made it tour, or are no longer on tour, so I can’t always compare myself with what Rory McIlroy or other players that I played with are doing.

“I love my life, and I’m happy, so I’ve got no complaints. You just have to keep asking yourself questions about what it is that makes you want to get up in the morning and keep playing golf, and as along as I keep having the answers, I’ll keep chipping away.”

Few would deny him that chance. Certainly not the man they call ‘Mr 59’ – although thankfully he also still answers to Oli.