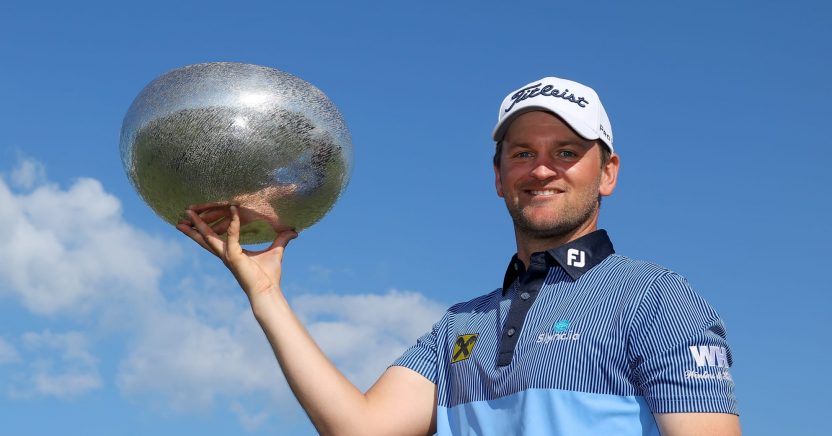 Austria’s Bernd Wiesberger successfully defended his Made in HimmerLand title in style as he cruised to a five-shot win in Denmark.

The 35-year-old had led after every round and, having started the final day with a one-shot lead, dominated proceedings with eight birdies in a closing 64. That gave him a 21 under par total and five shot margin of victory over Italy’s Guido Migliozzi, who raced up the leaderboard with a shot a closing 63. English pair Richard Bland and Jordan Smith shared third with Australia’s Jason Scrivener on 15 under.

After birdieing the first, Wiesberger had his only bogey of the day at the short third, but soon got the shot back from close range on the fifth. His tee shot on the par-three 6th cleared the water in front of the green with nothing to spare, but a sensational chip saw him rescue par and four birdies in five holes from the eighth turned the closing stretch into a procession.

“It’s unbelievable,” Wiesberger said. “I’ve had seven chances to defend a title and I wasn’t successful the first six. I’ve said it all week, I really like it here. Playing here is good for my confidence, especially after a couple of tougher weeks, so it’s a special place for me. It brings out the best in me. I got it going when I needed to so really enjoyable.”

Victory also propels Wiesberger into contention for a place on Padraig Harrington’s Ryder Cup team later this year. Asked about a possible debut, he added: “There’s a lot of golf to be played. First of all I really wanted to have a good week and start playing better golf again. This week really clicked for me, had a couple of good breaks on the way as well.

“I’ve got to keep playing good golf, but I would like to put my name in the vicinity of one of those spots. First things first, I need to play some more tournaments like this week and it will sort itself out.”

Migliozzi’s runner-up finish was his second in as many events after he also finished second at the Betfred British Masters and his third overall this season.

Wiesberger’s triumph means nobody has won more than his four titles on the European Tour since the start of the 2019 season – he joins world number one Dustin Johnson on that mark – and is likely to lift him back into the top 50 in the world rankings.