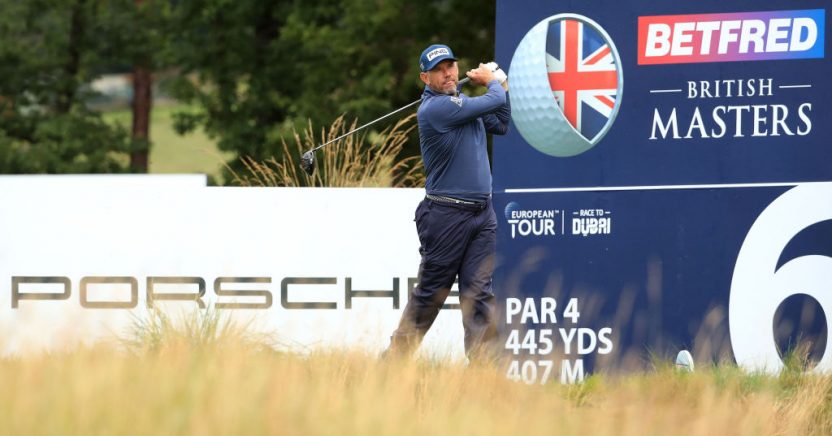 Tournament host Lee Westwood sealed his place in final two rounds of the British Masters on the cut mark of one under par, 10 shots behind Italian leader Renato Paratore.

Westwood, who is the attached touring professional at Close House near Newcastle, is easily the highest-ranked player in the field at world no.34, but faced missing the cut after dropping three shots in his opening three holes to move to two over par. Four birdies in his next seven holes lifted him to two under before another bogey on the 13th saw him beat the cut on the mark with a level-par 71.

Paratore is yet to drop a shot after following his opening 65 with a 66. South Africa’s Justin Harding shot an eight-under 63 to move to 10 under alongside Essex’s Dale Whitnell (64). The 31-year-old from Colchester, who has had a bogey-free first two rounds, had an eagle and five birdies in his second round, but said he is trying not to think about the first prize of £187,000 and two-year European Tour exemption. “I’m just trying to go about my business like I normally would and if it’s good enough, it’s good enough,” he said.

First round leader David Law shot a 69 to move to nine under, where he was joined by fellow Calum Hill (66), Ashley Chesters (66) and Rasmus Hojgaard (67).

Eddie Pepperell, one of only two other players in the field inside the top 100 in the world, is at six under after a two-under 69.

The British Masters is the first of six European Tour events being held in the UK this summer and players, officials and media are undergoing rigorous coronavirus testing procedures. The European Tour’s approach has been widely applauded, but it did lead to Andrew Johnston pulling out after nine holes of Thursday’s opening round. The Londoner said that he changed his mind several times about taking part, and only arrived on site on Tuesday in order to reduce his time at the venue, but after playing just nine holes he decided that he wasn’t happy and walked in.

“Being here, and being confined to the hotel and course, and not being able to bring my family, is ultimately not what I want at this moment,” Johnston said. “I’m struggling to get my head around it all. One minute I’m coming out of lockdown, going out for dinner, and then the next I’m back in lockdown in a hotel room.”