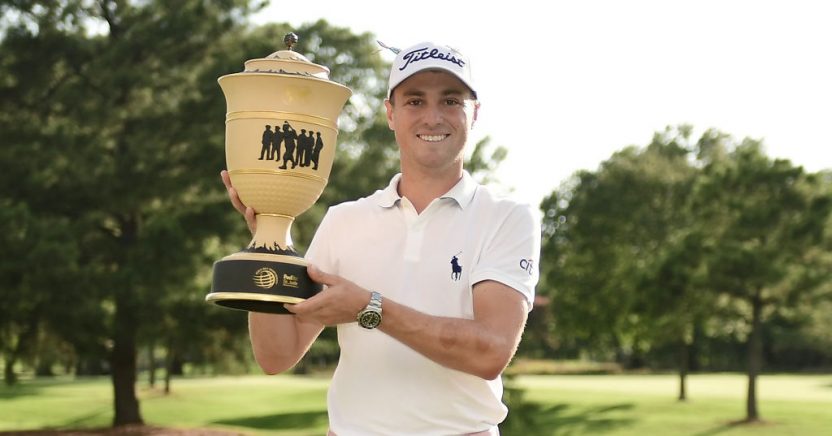 Justin Thomas returns to No.1 after WGC win
Featured News

Justin Thomas has returned to world number one for the first time in over two years after winning the WGC-St Jude Invitational in Memphis.

The 32-year-old American began the final round four shots behind leader Brendon Todd, but won by three from Brooks Koepka, Phil Mickelson, Daniel Berger and England’s Tom Lewis. Defending champion Koepka birdied 17 to get within one of Thomas, but found water on the last to end his hopes.

“It means a lot, especially with how I felt like I did it,” said Thomas, who fired a closing 65. “In the past, I struggled with coming from behind. I got wrapped up in how far I was behind and how many people.”

Three weeks ago at the Workday Charity Open, Thomas squandered a three-stroke lead with three holes to play before losing a play-off with Collin Morikawa.

“I feel like I learned a lot from that,” said Thomas, whose victory sees him overtake Jon Rahm and Rory McIlroy to take top spot in the world rankings for the first time since 2018. “I just didn’t get ahead of myself of  those last two or three holes, where I felt like my mind was kind of wandering and maybe thinking about winning. I basically just told myself to shut up and figure out what you’re doing, because I could lose this tournament just as easily as I won it.”

Koepka bogeyed 16 to give Thomas some breathing space, but then made a huge birdie putt on the next to close to within a shot, before driving into a stream on 18 on his way to a closing double bogey. Thomas’ short game on the back nine was impressive, with a number of deft pitches and high-class putting combining to make birdies and save par.

Overnight leader Todd struggled throughout and finished the day four over to tie for 11th. Hertfordshire’s Tom Lewis completed a thrilling weekend’s play, which began with a nine-under-par 61 on Saturday, with a closing 66 to take a share of third and claim $695,000 – the biggest payday of his career.

Matt Fitzpatrick finished joint sixth on nine under alongside Shane Lowry, while Tommy Fleetwood finished tied 35th on three under with Henrik Stenson and Graeme McDowell.