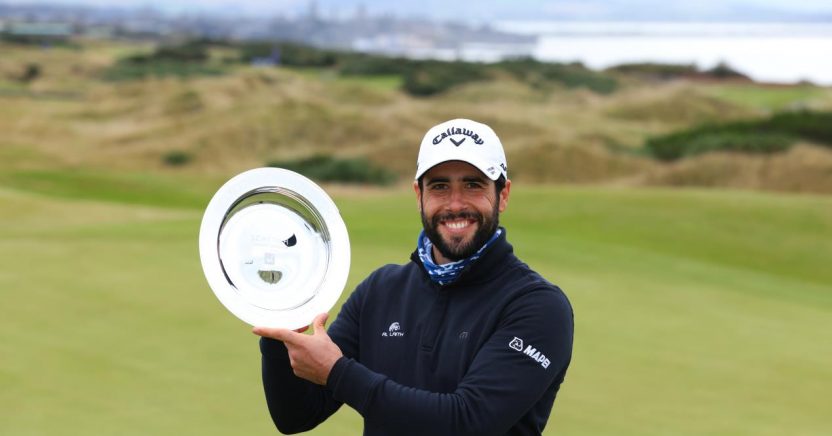 Spain’s Adrian Otaegui produced a brilliant closing round 63 to storm to his first 72-hole stroke play victory on the European Tour at the Scottish Championship at Fairmont St Andrews.

Otaegui, who won the 2017 Saltire Energy Paul Lawrie Match Play and the 2018 Belgian Knockout for his first two European Tour victories, showed all those head-to-head skills again as it came down to a three-man contest with playing partners Matt Wallace and Garrick Porteous.

Otaegui entered the day four shots off Wallace’s lead, but eight birdies in 11 holes from the fifth helped him finish at 23 under par, four clear of Wallace, who closed with a disappointing one-under 71, with Scottish Open champion Aaron Rai six off the pace in third after ending his week with a bogey-free 66. Porteous dropped three shots over his final three holes to slip into tied-fourth alongside Chris Paisley.

After an opening round of 62, Otaegui’s Sunday 63 bookended his week beautifully and saw him get over the line after three runner-up finishes in strokeplay events, including this season’s English Championship.

He said: “I’m very happy to win here in Scotland, the home of golf, next to St Andrews. It feels like a very special win for me. Stroke play is my favourite way of golf – I think it’s the proper way. You have to play very consistently all four rounds, which I think I did.”