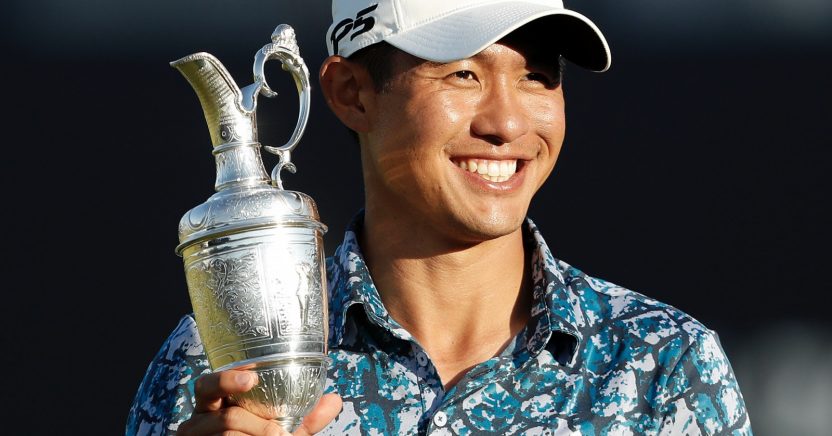 America’s Collin Morikawa fired a final round 66 to clinch the Claret Jug on his Open Championship debut at a sun-baked Royal St George’s in Kent.

Starting the final round just one shot behind Louis Oosthuizen, who had led from day one, the 24-year-old Californian grabbed the lead with three birdies over front nine and held off the charging Jordan Spieth – whose also closed with a 66 –  to win by two strokes with a 15-under-par total.

Morikawa, who won his first major on his PGA Championship debut last year, becomes the first Open debutant to win since Ben Curtis did so at this course in 2003. He also becomes the first player to win both majors at the first attempt.

Morikawa admitted he had little experience of links golf – and recorded his worst result as a professional when finishing joint 71st at last week’s Scottish Open – so the benign conditions perhaps suited the Californian, who is regarded as of one of the game’s finest iron players. Amid the searing heat on Sunday, the world no.4 also showed he has the temperament to add further to his major tally.

As three successive birdies dropped for Morikawa he suddenly found himself with a four-shot lead as he hit the turn, with Oosthuizen stuttering in the final pairing alongside him. But the first flicker of emotion from the American came at the 10th when he made a superb up-and-down from the back of the green to save par, fist-pumping in celebration.

By this point the Spieth charge was alive, but Morikawa birdied 14 to keep his compatriot at arm’s length and saved par again at 15. From there it was a case of keeping his nerve as the anticipation grew among the fans, but that was no trouble for Morikawa, who took a two-shot lead down the last and strode on the 18th green to huge applause. He two-putted for a final par to see out the victory and then clapped the fans packing out the 18th grandstand.

“I tell everyone I am not the biggest history guy, but I want to add myself to history and make memories for myself,” said Morikawa. “Everything about this week was very special, to cap it on my caddie’s birthday, makes it even more special. I’ve had belief in myself since turning pro that I can do it. When it’s coming to these tournaments, courses and styles that I have never played, I do my homework Monday to Wednesday to know what I need to do.”

Oosthuizen failed to find the spark that saw him break the record for the lowest opening 36 holes, with a closing one-over-par 71 seeing the South African drop into a share of third place on -11 with US Open champion Jon Rahm, who birdied four of his last six holes to card a 66.

Brooks Koepka and Dustin Johnson were other players who left themselves with too much ground to make up on the final day. Koepka’s 65 lifted him to joint sixth on eight under, but he admitted it was a “back-door top 10” after a 72 on Saturday took him out of contention. World No.1 Johnson had a similarly poor third round, with his closing 67 lifting him to seven under and a share of eight place with Scotland’s Robert MacIntyre, who finished as the top British player after a final day 67. He finished two shots ahead of Paul Casey at five under, who tied for 15th to lead what was a disappointing showing from the English contingent.

For the final scores from St George’s, visit www.theopen.com/leaderboard