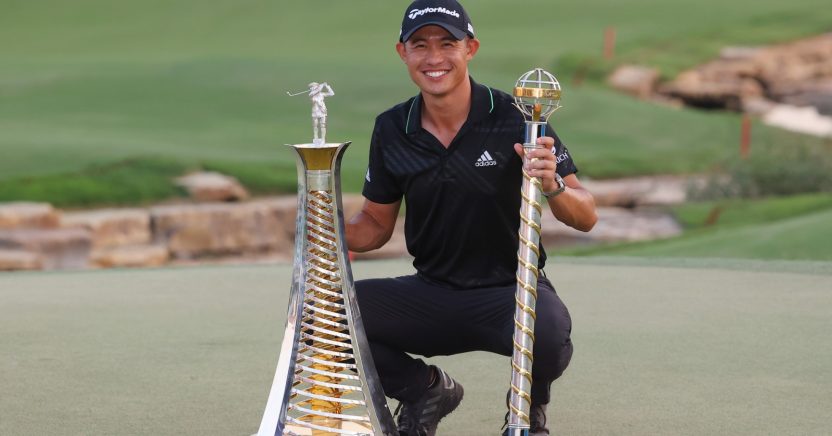 Collin Morikawa became the first American to win the European Tour’s money list after chalking up a three-stroke victory at the season-ending DP World Tour Championship in Dubai.

A truly stunning 2021 season for the 24-year-old, which had already yielded a maiden World Golf Championships title, a second Major trophy, and a winning debut appearance in the Ryder Cup, was given a fairytale ending at Jumeirah Golf Estates.

Morikawa, whose last bogey of the tournament came on the 13th hole during round two, had to be patient in the final round as he picked up only one shot on the front nine. But his round took flight from the 12th, when a birdie three kicked off an incredible run of five birdies in the final seven holes.

With the Californian piling the pressure on third round leader Rory McIlroy, the Northern Irishman suffered a horrid stroke of bad fortune at the 15th, his approach hitting the pin and rebounding into a greenside bunker, resulting in the first of three bogeys coming home for the two-time Race to Dubai Champion.

Morikawa’s exhibition round continued to delight the fans down the stretch, as the reigning Open Champion drained a lengthy birdie putt for a two at the 17th, before coming within inches of a closing eagle at the 18th hole on the Fire Course.

A tap-in birdie, however, was enough for a six-under 66 and a 17 under total, bookending a week which began with his receiving Honorary Membership of the European Tour.

Matt Fitzpatrick, last year’s The 2020 DP World Tour champion, had earlier given himself a shot at a successful title defence, but he had to be content with a share of second spot alongside Swede Alexander Björk, with respective final rounds of 66 and 70 leaving them on a 14 under total. Nicolai Højgaard and Robert MacIntyre shared fourth on 13 under par, while McIlroy finished in a share of sixth alongside Ian Poulter and Dean Burmester.

Speaking about becoming the first US player to win the Race to Dubai point lists, Morikawa said: “It’s very special and an honour. To be the first American to do that, to put my name against so many greats is very special.  To have this chance, and close it out with a win in the DP World Tour Championship, what a great way to finish that.”

He added: “Starting off with six pars, especially with some birdie holes, wasn’t fun. I felt like I was hitting some good shots, but I wasn’t getting the breaks I needed. When I looked at the leaderboard after nine, I knew that I was still in there and I just needed one spark. And at 12, I got a great break, thinning my second shot, made the putt, and that got the momentum started and from there on in the putts somehow started dropping, and that’s always fun.”

The tournament marked the end of the European Tour, as it will become the DP World Tour from the start of the 2022 season – which begins at the Joburg Open on Thursday – and features a total prize fund in excess of  £147m across 47 events in 27 countries.

To see the final Race to Dubai rankings, click here.