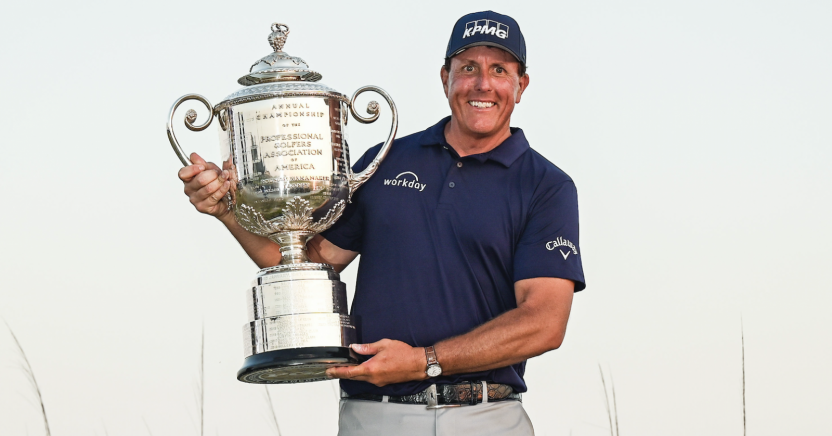 Mickelson seals triumph for the ages at PGA Championship
Featured

Phil Mickelson became the oldest man to win a major title as he claimed the US PGA Championship at Kiawah Island following a thrilling final day’s play at the South Carolina resort.

Crowds swamped the popular American as he marched up to the 18th fairway on his way to clinching a sixth major title, eight years after his last.

“It was quite unnerving, but exceptionally awesome. I don’t think I’ve ever experienced anything like that before,” said Mickelson, who won on six under par at the Ocean Course after a closing one-over-par 73. He finished two shots clear of fellow American Brooks Koepka, who closed with a 74, and South Africa’s Louis Oosthuizen, who signed for a 73.

Mickelson takes the record of oldest major winner from Julius Boros, who won this title in 1968 at the age of 48, and also joins Nick Faldo and Lee Trevino as a six-time major winner. Only 11 players have won more.

“This is just an incredible feeling. I just believed that it was possible, yet everything was saying it wasn’t and I hope that others find that inspiration,” added Mickelson. “It may take a little extra work and harder effort to maintain the physicality, or maintain the skills, but gosh is it worth it in the end. I just love this game and I love what I do and I love the challenge of competing against such great players.”

Having already being extended a special invitation to play in next month’s US Open at Torrey Pines, Mickelson has now qualified by rights, and if he manages to win there – a venue at which he has already won three times – he will become only the sixth player to complete the career Grand Slam.

The final round was filled with thrills and spills aplenty, with Mickelson’s one-shot 54-hole lead disappearing at the very first hole, which he bogeyed and playing partner Koepka birdied to take the lead. But just one hole later, Koepka found trouble at the par five, racking up a seven to Mickelson’s birdie and the old stager was back in front by two.

Mickelson held on to the sole lead despite a bogey at three after two loose chips around the green, but only because Koepka missed a three-footer for birdie. And then a moment of magic from the champion, chipping in from the sand to birdie the par-three fifth and send the Kiawah Island crowd almost delirious.

Mickelson followed up with a bogey and Koepka took advantage by pulling back level, only to send a disastrous approach at seven on to the cart path on his way to another dropped shot as Mickelson got up and down for a birdie that sent him clear once more.

The veteran hit the turn with a two-stroke lead intact and increased it to four at 10 with a well-made birdie as Koepka found the sand and failed to recover.

The left-hander had a five-stroke lead at the same stage on Saturday, only to watch it evaporate over the next three holes, but not even a fan picking up his ball after a wayward drive at 11 could faze him this time as Mickelson saved par and Koepka bogeyed to drop five back, meaning Oosthuizen was once again his closest challenger.

Having avoided the water off the tee at 13, Mickelson then found it with his approach to the green and made back-to-back bogeys, though Oosthuizen dropped two shots on the same hole after also finding the water. That meant Mickelson led by three shots with four to play.

Oosthuizen, whose sole major win came at the 2010 Open, birdied the 16th to keep the fight alive, but moments later Mickelson hit the longest drive of any player this week on the hole, some 366 yards, on his way to a birdie of his own.

At the daunting 231-yard, par-three 17th, he hit his drive long and chipped out of the rough for a two-putt bogey and headed to the 18th with a two-stroke advantage.

He pushed his drive left at the final hole and as he assessed his options from in front of a hospitality stand, fans started to swarm onto the fairway.

After some deliberation, he hit a nine-iron into the heart of the green, and the crowd immediately surrounded him, and Mickelson, with the help of officials, had to push his way through to reach the putting surface to put the finishing touches on his historic win.

Further down the leaderboard, Padraig Harrington, who turns 50 in August, made his own attempt at rolling back with years, with Europe’s Ryder Cup captain, who won the PGA Championship in 2008, posting a closing 69 to finish on two under and share fourth place with fellow Irishman Shane Lowry. The reigning Open champion also recorded a 69.

“I don’t think I have enjoyed a round of golf as much as I have playing with Shane,” said Harrington. “It was amazing how relaxed I was from tee to green. When you have your head in the right place it is much easier to play good golf. It was a very nice pairing.”

Paul Casey also shared fourth and briefly threatened to put an early run together with back-to-back birdies on two and three, but five birdies overall were offset by four bogeys as he finished four off the lead.

Justin Rose failed to break par in the opening three days, but posted one of the rounds of the day with a five-under 67 that included eight birdies, a bogey and a double to leave the Englishman one under for the tournament. Northern Ireland’s Rory McIlroy was unable to tame the Ocean Course as he did during his 2012 victory, with the pre-tournament favourite finishing on five over par.