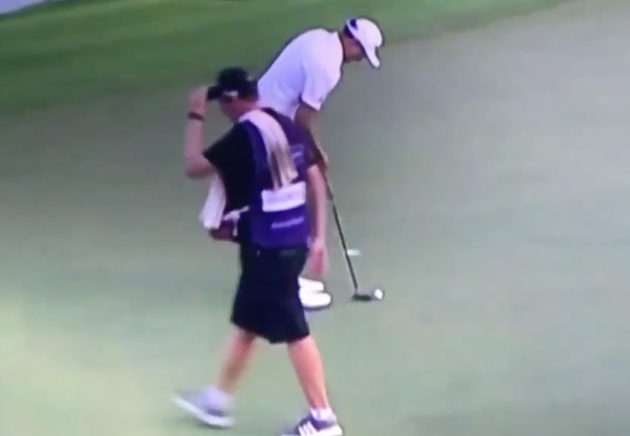 The application of the new Rules of Golf caused controversy in an unlikely quarter over the weekend, when China’s Haotong Li was docked two shots after his caddie was deemed to have lined him up over a two-foot putt on the final hole of the Dubai Desert Classic.

Under the new rules – which don’t apply to amateurs – caddies are no longer allowed to stand behind their players during the execution of the stroke. Rule 10.3b(3) states that a caddie cannot “Deliberately stand on or close to an extension of the line of play behind the player’s ball when the player begins taking a stance for the stroke and until the stroke is made (Rule 10.2b(4).”

Li, a two-time European Tour winner and the defending champion, had a short birdie putt on the last hole and his caddie, Mike Burrow, was behind him appearing to be helping out with reading the putt. However, by the time Li had taken his stance and adopted his address position over the putt, his caddie had moved away. Although, according to European Tour rules officials, he hadn’t moved away quickly enough, and they issued a two-stroke penalty, which saw Li drop from a share of third to tied 12th, and lose almost €100,000 in prize money.

The penalty has angered many tour pros on social media, including Eddie Pepperell, Ross Fisher, Richie Ramsay and Pablo Larrazabal. Pepperell tweeted: “Hard to believe @haotong_li has been penalised for this. Frankly, I think it’s a shockingly bad decision and for the life of me I cannot see how Mike has lined Haotong up here.”

The overwhelming reaction against the harshness of the ruling caused the European Tour to issue a statement the following day, which came out in support of the player.

In a prepared statement, European Tour CEO Keith Pelley said: “There has been much discussion and comment over the past 24 hours on the two-shot penalty given to Li Haotong for his breach of Rule 10.2b (4) on the 18th green of the Omega Dubai Desert Classic. Let me state initially that, under the new Rules of Golf issued on January 1, 2019, the decision made by our referees was correct, under the strict wording of the rules. It is my strong belief, however, that the fact there is no discretion available to our referees when implementing rulings such as this is wrong and should be addressed immediately.

“Everyone I have spoken to about this believes, as I do, that there was no malice or intent from Li Haotong, nor did he gain any advantage from his, or his caddie’s split-second actions. Therefore the subsequent two shot penalty, which moved him from T3 in the tournament to T12, was grossly unfair in my opinion. In an era where we are striving to improve all aspects of golf, we need to be careful and find the proper balance between maintaining the integrity of the game and promoting its global appeal.

“I have spoken personally to R&A Chief Executive Martin Slumbers to voice my opposition to the fact there is no discretion available to our referees in relation to this ruling, and I will be making additional representation to the R&A in the near future to discuss the matter further.”