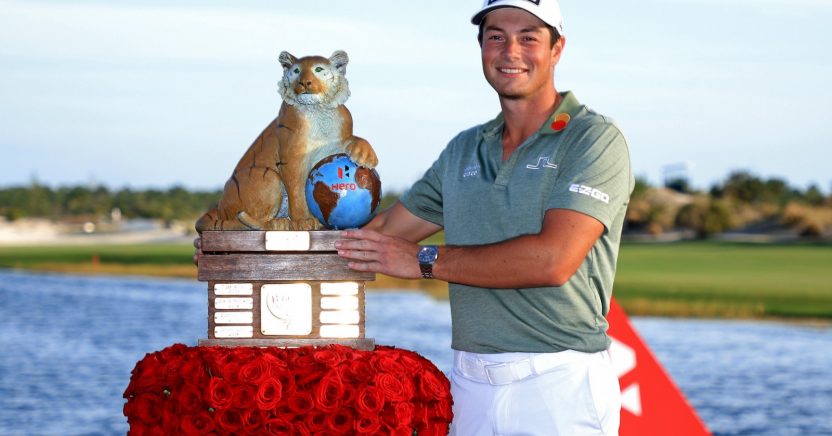 Viktor Hovland carded a closing 66 to win the Hero World Challenge in the Bahamas, as Collin Morikawa blew a five-shot lead heading into the final round.

The 24-year-old Norwegian bagged two eagles and five birdies in his six-under-par final round to finish on 18 under, one shot clear of American Scottie Scheffler, who matched Hovland’s 66.

Morikawa had led by five shots after 54 holes, but ended up on 14 under after a four-over 76 to finish tied fifth, and missed out on a chance to take the world no.1 spot from Jon Rahm.

Hovland, who won the PGA Tour’s Mayakoba Championship last month, was six shots behind Morikawa going into Sunday, but got off to a flying start with consecutive birdies at holes 6, 7 and 8. After trading birdie and a bogey at 11 and 12, his round really caught light with back-to-back eagles on 14 and 15, with the first coming courtesy of a holed bunker shot for his third eagle of the week on the 307-yard 14th hole.

“I didn’t think a win was going to be very plausible, but I know this golf course is tricky,” said Hovland, who moved up to the seventh in the world rankings following his third win of the year. “You can make a lot of birdies and make up a lot of ground, but it’s very easy to make bogeys and doubles. I knew if I put a good score up there you never know what is going to happen.”

Justin Rose and Tyrrell Hatton fared best of the UK contingent finishing tied ninth on 11 under, with Matt Fitzpatrick one shot back in a share of 12th, while Rory McIlroy ended up finishing 18th in the elite 20-player field after a closing  70 left him on six under.

Henrik Stenson and Jordan Spieth, who finished 19th and 20th respectively, were both penalised two shots in the final round for playing off the wrong tee on the ninth hole. The pair left the 8th green and then teed off on the 17th tee playing towards the ninth green and only realised their mistake when informed by a rules official as they reached their balls ahead of their second shots.