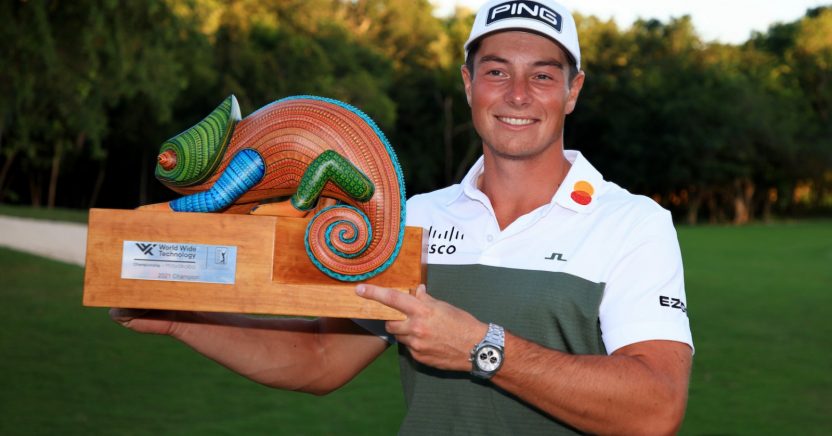 Viktor Hovland eased to a four-shot victory at the 2World Wide Technology Championship at El Camaleon Golf Club in Mexico.

The 24-year-old Norwegian fired rounds 67, 62, 62 and 67 for a 23-under par total, and a four-shot margin of victory over runner-up Carlos Ortiz with Justin Thomas a further shot back in third.

Hovland’s third PGA Tour win, and fourth career win, moved him to a career-high 10th in the world rankings and fourth in the FedEx Cup rankings for the 2021-22 season.

Hovland secured the win despite having had the shaft of his Ping driver snapped by fellow competitor Danny Lee on the day before the tournament while the pair were practicing on the driving range. Hovland had challenged Lee to see how far he could hit the ball with his own driver, and it promptly snapped after impact. Without a tour truck on site, or a spare shaft to hand, Hovland had to borrow a driver from fellow player James Hahn. Although it was the same make and model of driver, the shaft was an inch shorter and the flex was different than what the Norwegian was used to, but it didn’t seem to harm his game, as the subsequent scores, and the win, showed.

Speaking about the impact of the enforced driver switch, Hovland said: “James’s driver probably went about 10 yards shorter than my own, but I felt like I could hit it a little lower and a little straighter, which was perfect around this course, which is pretty tight in places.

He added: “I played really good golf throughout the week. I did not have my best stuff tee to green today, but I had a good day with the putter.”