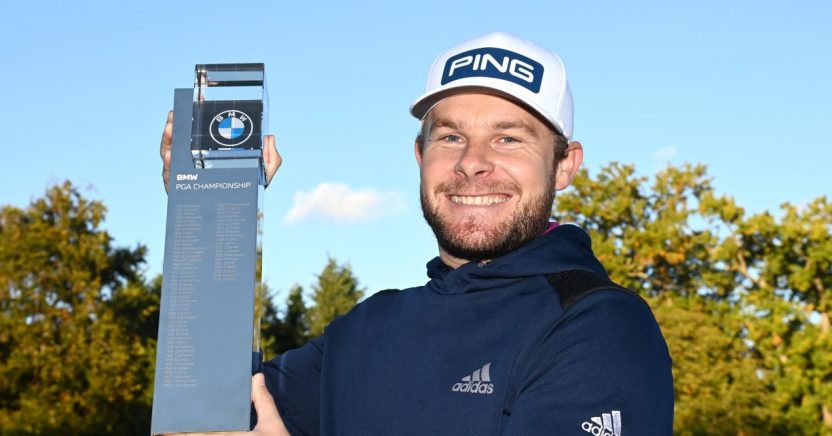 Tyrrell Hatton fulfilled one of his biggest career ambitions when capturing the BMW PGA Championship at Wentworth.

The 28-year-old from Buckinghamshire, who regularly attended the tournament with his dad when he was growing up, secured one of the biggest wins of his career after shooting a five-under-par final round 67 for a four-stroke victory.

In more benign scoring conditions than on the previous three days, numerous challengers staked a claim for the title early on, but Hatton – who admitted that he had been more nervous ahead of the final round than he had been on his Ryder Cup debut in 2018 – was composure personified as he pulled away from the pack thanks to three successive birdies around the turn. He never looked back and a birdie at 15, followed by another at the final hole, earned him a 19 under par total, and a wide margin win over nearest challenger Frenchman Victor Perez.

Perez, who started the final day three shots behind Hatton, reached the turn in four under after an eagle at the par-five fourth, but his challenge for the back nine and he signed for a 68 and a 15 under total.

Patrick Reed extended his lead at the top of the Race to Dubai rankings with a share of third place on 14 under, alongside Andy Sullivan, who fired a best of the day 64. Ian Poulter was a further shot back on 13 under par after a closing 68 saw him produce his best ever finish at the PGA.

Hatton said: “It’s very special to be standing here holding this trophy. It’s been a dream of mine since I was a kid to play the tournament and hopefully win it one day, and thankfully this year is my year. I didn’t know exactly where I stood over the last few holes, and I was really nervous over the closing stretch, but as I found out that I had a three-shot lead going down the last, that settled me down a little bit. It was nice to get up-and-down at 18 after a terrible second shot. My short game has been really good all week, and it was just a nice way to sign off.”

The win takes Hatton inside the top ten in the world rankings for the first time in his career, and up to eighth in the Race to Dubai money list.