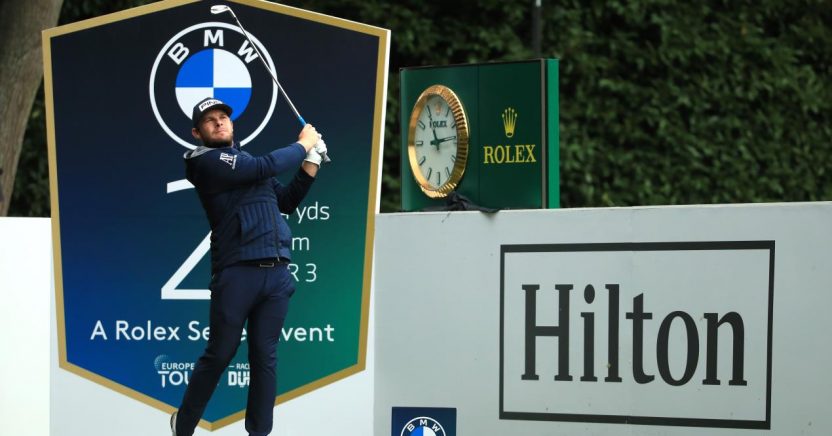 Tyrrell Hatton enjoyed a happy homecoming in his first round on British soil in 2020 with an opening round of 66 for a share of the lead with Adri Arnaus and Justin Harding in the BMW PGA Championship at Wentworth.

The 28-year-old from Buckinghamshire carded an eagle and five birdies, including one at the eighth – his final hole – en route to his six-under-par score. The world no.15 was joined at the summit by South African Harding and Spaniard Arnaus, both of whom enjoyed flawless rounds in the more favourable afternoon conditions.

Four players sit one shot off the pace, including reigning Open Champion Shane Lowry, who continued his strong form on Wentworth’s West Course by opening with a 67 which comprised five birdies in his final six holes. The Irishman shares fourth place with Matt Fitzpatrick, Eddie Pepperell and Gavin Green. Aaron Rai, who won his last week’s Scottish Open, and Justin Rose, were among those players a shot further back on four under after opening 68s.

Ryder Cup team-mates Tommy Fleetwood – who was four over after seven holes – and Ian Poulter, who was troubled by back spasms throughout the day, both produced outstanding finishes to get under the card by the close. Fleetwood completed his back nine in just 32 strokes, whole Poulter closed out his round in sensational style, making birdies as 16 and 17, before eagling the 18th after hitting his second shot to 12 feet at the par-five hole.

Speaking after his round, Hatton said: “The conditions were tough out there this morning in the rain, and I hit a few poor shots, but I recovered really well and that kept my momentum going. It was easy to make mistakes out there, so I’m very happy with my round. I just feel pretty comfortable out on the golf course. I’ve been around it so many times now that it almost has that home course feel to it. It would be special to win the BMW PGA Championship. This is a tournament I’ve been coming to since I was five. To lift the trophy here is a goal of mine in my career, and hopefully I can play well the next few days and give myself a chance to do that.”