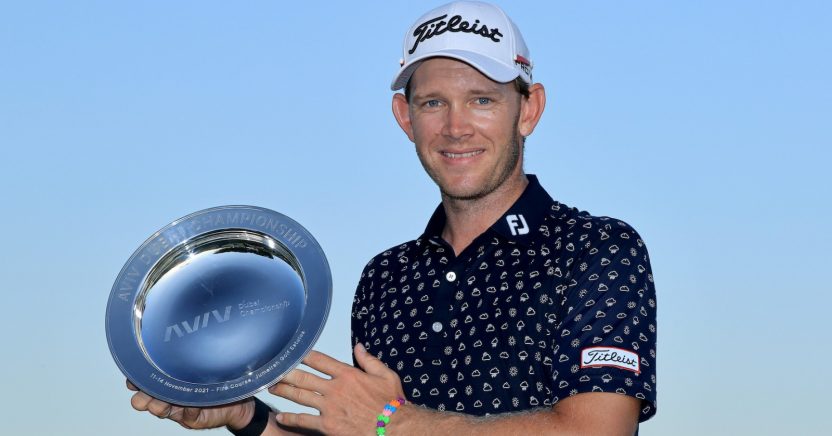 Denmark’s Joachim Hansen posted a final round of 68 to win the Aviv Dubai Championship by one shot from Bernd Wiesberger and Francesco Laporta.

Hansen dropped only a single shot in 72 holes over the Fire Course at Jumeirah Golf Estates  – a bogey five on the 15th in his third round – as he claimed his second European Tour title to add to his 2020 Joburg Open triumph.

The 31-year-old started the final round tied for the lead with Laporta but he birdied the opening hole to move clear at the top of the leaderboard and never relinquished his advantage, adding three more birdies to his scorecard on the 7th, 10th and 13th holes to finish on 23 under par.

His playing partner Laporta rolled his birdie chance agonisingly past the cup on the last to finish one short in a tie for second with Wiesberger, who had set the clubhouse target of 22 under par with a closing 65.

Hansen needed a victory to secure his place in next week’s season-ending Rolex Series event, the DP World Tour Championship on the neighbouring Earth Course, rising 42 places from 85th to 43rd on the Race to Dubai rankings.

Hansen said:“The first two rounds were some of the best of my life. Yesterday wasn’t great, and I have really struggled to find the middle of the club on my woods. I didn’t drive it well, but my putter helped today, I putted a lot better than yesterday. That kept me in the game. I’ve heard that before about me looking calm, but no way. I said to my caddie down the last Adam ‘I’m struggling here mate, we need to talk about something else’ because I was thinking too far ahead and that was hard.

“I didn’t expect it at all. I just wanted to have a nice week with the family with a good tournament and the lovely weather down here, it turns out with a good nine under start and stayed in contention all week and it’s nice to come out on top. I spoke to my coach about it, when you don’t chase it or expect to win, you win. I think that’s what’s happened this week.

“I’m very proud of myself to get it done because I wasn’t playing great out there. But I managed to keep the ball in play and give myself some good chances and I’m lucky Francesco or no one else managed to hole any putts.  So I’m just going to take next week as a bonus week and try to enjoy it. It’s been some season for Danish golf. I hope it inspires lots of golfers back home.”

Andy Sullivan produced a remarkable finish – picking up seven shots in his final six holes, including an eagle on the last – to record a closing 65 to finish three back on 20 under par, which looked to have secured his spot in the all-important top 54 on the Race to Dubai and qualify for the DP World Tour Championship. However, Thailand’s Jazz Janewattananond also eagled the last to join him on that mark, which meant Sullivan dropped to 55th position and missed out by one point, and ultimately, by one place. Players may drop out between now and next week, so the Englishman will remain on standby for a late call up.