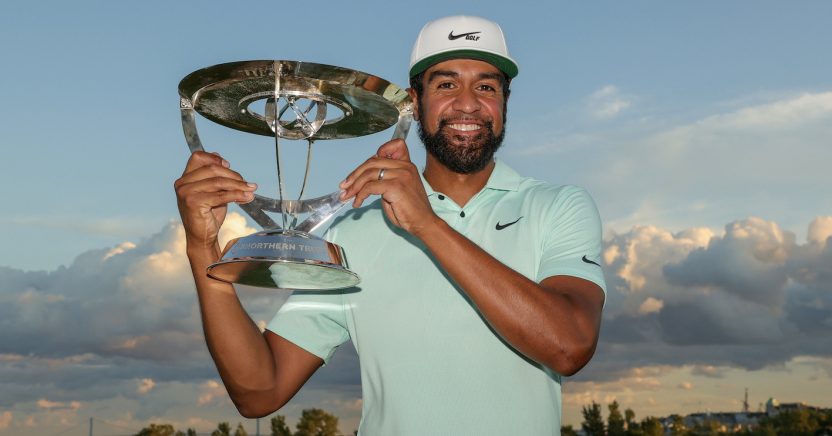 US Ryder Cup hopeful Tony Finau ended the long wait for his second PGA Tour victory after he beat Australia’s Cameron Smith in a playoff at the weather-delayed final day of The Northern Trust.

Finau has played in 142 tournaments since his first PGA Tour victory in Puerto Rico over five years ago, and has notched 10 runner-up finishes, three of them coming in extra holes. But the 31-year-old American finally got over the line in New Jersey thanks to a back-nine charge and a helping hand from Smith, who carved his drive out-of-bounds on the first extra hole with Finau already in the middle of the fairway.

A solid six-iron to 20 feet put the outcome beyond any doubt with Smith still lining up his fifth shot from the fairway, and a two-putt par was good enough to win the first of this season’s three FedExCup playoff events.

World No.1 Jon Rahm shared the 54-hole lead with three-time PGA Tour winner Smith – who carded an 11-under-par 60 in round three – heading into the final day, and triumph for Finau looked unlikely midway through the final round as he trailed the Spaniard by three shots. But an impressive back nine from the American, which included three birdies and an eagle in a five-hole stretch, led to an 20-under-par total, which was matched by Smith.

And it was a victory stroll that Finau admitted he has been dreaming about for longer than he cares to remember. “I feel like it’s been a long time coming, but I also feel like you have to earn everything out here,” he said. “Nothing’s given to you and I was able to earn this win, and hopefully the future continues to be bright. I’m playing some great golf and I feel like I can go on a run, so why not continue right on to next week.”

He added: “Nothing has come easy for me. I’ve lost in playoffs, taken second and third in major championships, but I’ve persevered and that’s the biggest key – I haven’t given up on myself and on my team. Things are great and now to finally have this happen again is great for my family and for my career.”

English trio Ian Poulter, Matt Fitzpatrick and Tyrrell Hatton were among those whose PGA Tour season ended after they finished outside the top 70 in the FedEx Cup standings. The top 70 finishers from the Northern Trust now move on to Thursday’s BMW Championship, the second of the FedEx Cup play-off events.

To view the final leaderboard from the Northern Trust, click here.