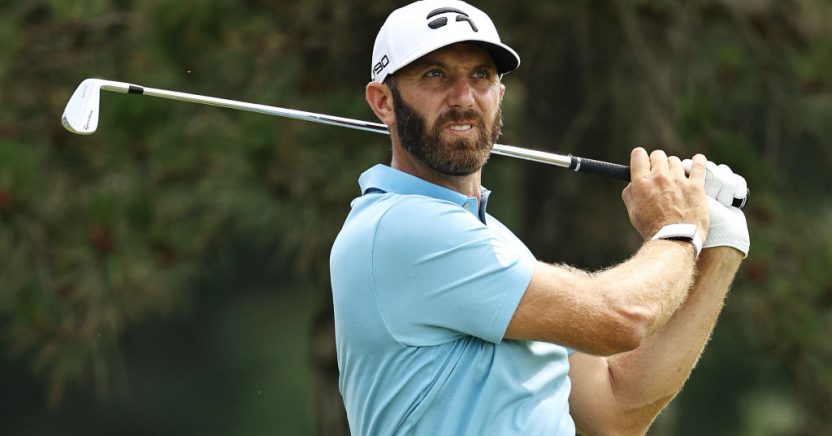 A pair of bogeys on the back nine and a rain delay were not enough to prevent Dustin Johnson from winning the Travelers Championship by one stroke in Connecticut.

The 36-year-old American dropped shots on the 13th and 16th holes at TPC River Highlands, but a three-under-par 69 took him to 19 under overall to hold off the challenge of compatriot Kevin Streelman by a stroke.

In winning the title, Johnson became only the third player in PGA Tour history to win a title in each of his first 13 seasons, joining Jack Nicklaus (17) and Tiger Woods (14).

“I’m definitely proud of myself for continuing the streak – it was a long time between wins though. Hopefully it won’t be that long for the next one,” said Johnson after his 21st PGA Tour win, which came 16 months after his 20th.

Johnson narrowly avoided disaster on 15, when he was forced to remove his shoes and stand in a pond to hit his ball, which had landed on the damp turf next to the water. He made par, only to bogey on the next hole, after rain forced a brief delay.

“Even though there’s no fans here, you can still feel the pressure,” added Johnson after the behind-closed-doors event. “The rain delay didn’t help very much because then I actually had time to think about everything.”

American Will Gordon and Canadian Mackenzie Hughes finished tied for third on 17 under, while third round leader Brendan Todd collapsed on Sunday with a 75 to finish tied 11th alongside eight other players, including Rory McIlroy, who closed with a 67. Bryson DeChambeau bagged his third consecutive top-10 finish since the PGA Tour’s restart, firing a closing 68 to finished tied sixth.