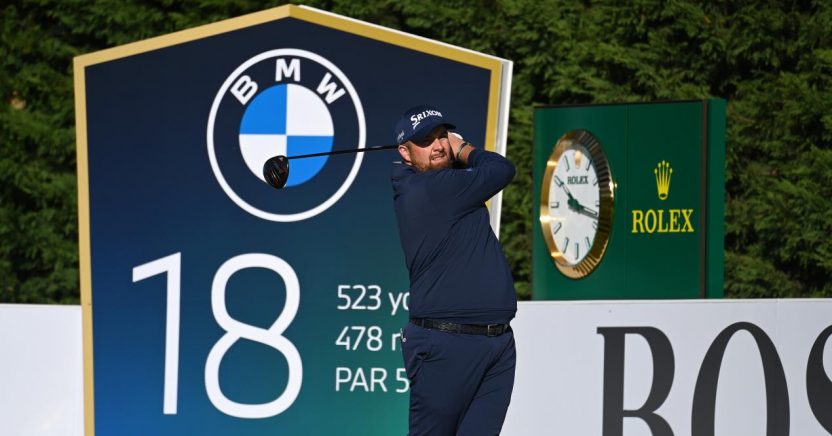 Shane Lowry and Matt Fitzpatrick both carded seven-under par 65s to share the halfway lead at the BMW PGA Championship at Wentworth.

For Lowry, it continues a remarkable love affair with the West Course, on which no other player has carded more rounds of 67 or lower since 2011 – a feat which the Irishman has achieved seven times now. His flawless round was his lowest on the European Tour in 2020, moving him to a 12 under total. He was joined at the top by Fitzpatrick, who had carded seven birdies and an eagle to move into a two-shot lead stepping onto his 36th hole of the week, but a double-bogey at the eighth – his last of the day – meant he had to settle for a share of the lead with Lowry.

Both players will enter the weekend targeting a maiden Rolex Series triumph, while Tyrrell Hatton, who already has two Rolex Series titles to his name, is one shot back after finishing his second round of 67 with three birdies in his final four holes. Denmark’s Joachim B Hansen and Frenchman Victor Perez are two shots further back on a nine under par, while Race to Dubai leader Patrick Reed moved into the top ten on six under par courtesy of a 68.

Lowry said: “It was an absolutely beautiful morning to play golf. We got quite lucky, no wind, although it was quite cold. The wind didn’t pick up until maybe last five or six holes and thankfully I’ve taken advantage of it. I’ve had a couple of decent scores, so we’ll see what I can do on the weekend. I just always have loved this place. I came here in 2010 first when they had only just done the redesign and I remember everybody moaning that year. You know, they made a lot of changes since then and it’s great and it’s not as hard as it was. I just love coming back.”

Fitzpatrick said: “Everything’s been solid, really. I drove the ball well, chipped well, putted well, iron play is good. So it’s been nice that it’s all come together. It’s nice being back in the UK. I wish it was a bit warmer, but the golf courses over the last two weeks have been great, and just being back in familiar territory seeing familiar faces has been great. This is my best position since I’ve been here at Wentworth. I love the course. I’ve always felt it suited my game, but I’ve never really kicked on around here, but if I can just keep playing how I’ve been playing, make some putts, as well, there’s no reason why I can’t finish it off.”