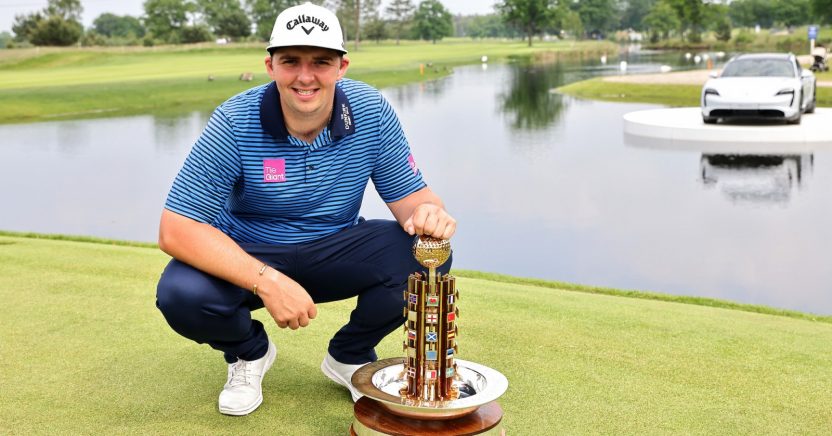 The Englishman made six birdies and an eagle to race to into a four-shot lead through 15 holes, but after a bogey on 16 and a remarkable chip to save par on 17, he faced an anxious wait to see whether any of the closing groups could reach his eight under par total.

His compatriot Matthew Southgate was his closest challenger and was just one shot back standing on the 18th tee, but he could only send his drive into the water on the last to fall back into the pack on six under par, confirming Armitage’s first win in his 71st European Tour appearance.

Southgate was joined in a tie for second place at six under par by Edoardo Molinari, Thomas Detry and Darius Van Driel. Defending champion Paul Casey was two shots further back in sixth.

Armitage, 33, who lost his mother to cancer as a teenager, was clearly emotional after becoming the fourth consecutive English winner in Hamburg, following Jordan Smith, Richard McEvoy and Casey.

“It means everything to me. It’s what you dream about as a kid,” he said. “I had a 20-footer down the hill on the last and I stood over it and thought about the amount of times you’ve stood on the putting green as a kid and said ‘two putts to win a Tour event’. I did it. It’s massive for me and for my family.

“I lost my mum 20 years ago, and ever since that day I’ve dreamt about being a winner. I’m sure she’d be proud, but deep down this one is for me. All those lonely days on my own, dealing with life. You have times when you think it might not happen, but I just stuck at it.”

As well as the €180,000 first prize and two-year exemption, victory earned Armitage a place in this month’s US Open at Torrey Pines, while he was already qualified for next month’s Open Championship at Royal St George’s.

“To go to a US Open at Torrey Pines, where I watched Tiger winning back in 2008, is going to be a special, special trip. I can’t wait,” he said. “Callaway gives out speciality bags to staff players for the US Open and the Open Championship, so I’m looking forward to getting hold of those too!”