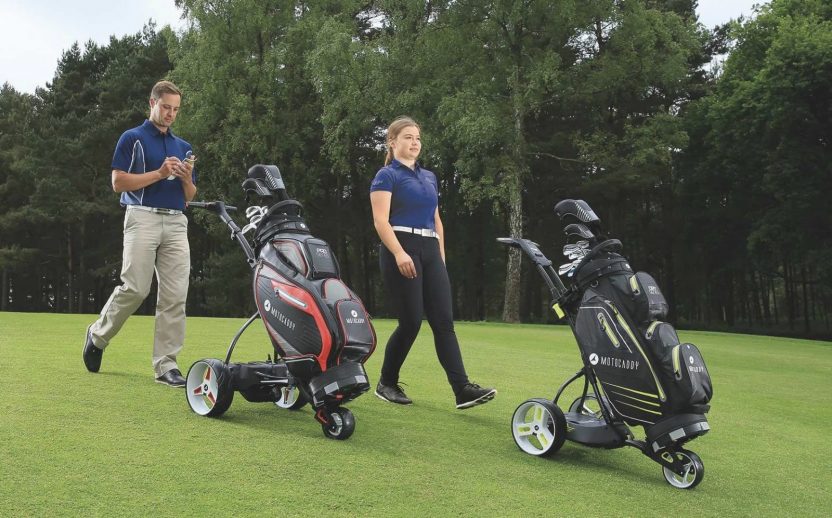 Ten years after introducing its first ‘Downhill Control’ model, electric trolley brand Motocaddy is extending the option across all of its compact M-Series trolleys released this year.
The new line up of M-Series models with Automatic Downhill Control are the M1 DHC, M3 PRO DHC, M5 GPS DHC and the M-TECH. Each trolley can maintain a constant speed while moving down a gradient and comes with an electronic parking brake and all-terrain wheels. The soon-to-be-released M7 REMOTE trolley will also offer the DHC feature and is set to take ‘hands-free’ golf to a new level.
Both the M3 PRO and M-TECH models also feature full colour LCD screens, while the M5 GPS version is the world’s first compact-folding electric trolley to include a fully-integrated GPS system built into a touchscreen display.These M-Series models share a ‘SlimFold’ design that offers a smaller folded footprint for easy car boot transportation and storage and are powered by lightweight lithium batteries. All Motocaddy trolleys feature a USB charging port, Adjustable Distance Control and a free accessory station as standard.“Extending DHC models across the M-Series provides golfers with more than just a greater choice of styles and functions to confront slopes on the fairways,” said Motocaddy’s marketing manager Oliver Churcher. “DHC trolleys can also help them avoid potential injury by reducing the strain on knees, hips and ankles when going down hills. That’s one of the reasons why the popularity of DHC trolleys is rapidly growing at pace, especially in the UK market.”

To view all the latest models in the Motocaddy range, visit www.motocaddy.com