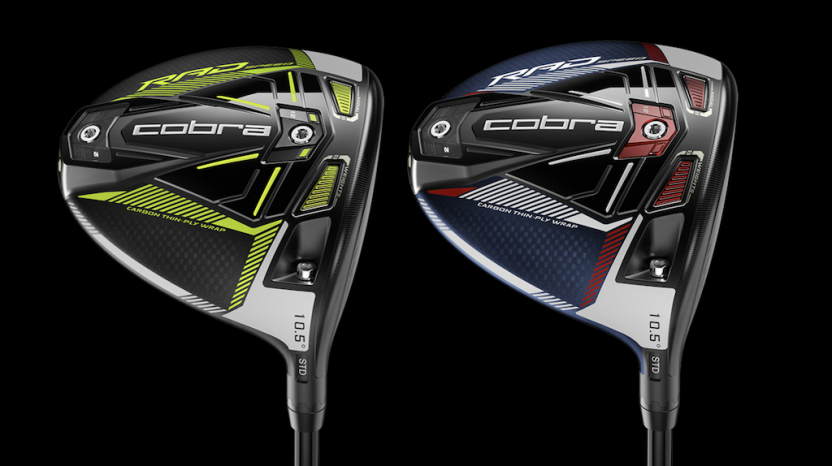 The name of Cobra Golf’s new range of RADSPEED Drivers, Fairways and Hybrids, which go on sale at the end of January, was inspired by its key technology, Radial Weighting, with the entire range aimed at maximising performance for the full spectrum of players through optimised weighting.

The design concept originated from a popular formula in engineering called ‘Radius of Gyration’, which is the distance from the club’s centre of gravity to each weight or technology location. Cobra’s engineers discovered that by increasing the Radius of Gyration and the distance between the front and back weights, they could create the perfect blend of fast ball speed, low spin, and forgiveness in one driver. Utilising Radial Weighting, the weight is strategically positioned in each of the three new driver models, creating three distinct performances.

RADSPEED DRIVER – £369
The new RADSPEED driver is designed with a 460cc traditional shape, and forward-biased Radial Weighting to appeal to the better player seeking low spin, low launch and workability. The chassis features 28g positioned in the front, (16g of fixed weight; & 12g adjustable weight) and an additional 10g positioned in the back (8g fixed weight; 2g adjustable weight) to create the perfect balance of front and back weighting for speed and stability. By pushing the weight as far forward and as far back as possible, COBRA engineers were able to design a driver capable of providing the fastest ball speed with extreme forgiveness – an engineering feat that has not been achieved until now.
Using a lighter T-Bar Speed Chassis and a thinner Carbon Fiber Wrap Crown, engineers were able to save 13g (7g in the chassis/6g in the carbon) that they could reposition forward to lower the CG and produce more speed. Two adjustable weights in the front and back (12g & 2g) allow players to fine-tune their desired launch and spin performance. A final but very notable feature of the new RADSPEED driver is the CNC Milled Infinity Face, which requires about 25 minutes of milling for every single clubface produced. COBRA’s proprietary CNC milling process is a significant advancement over the traditional hand polishing method and produces thickness and bulge and roll tolerances that are up to five times more precise. This process ensures consistent performance on every driver, which delivers thinner faces for maximum ball speed and perfect curvatures for forgiveness on off-center hits. 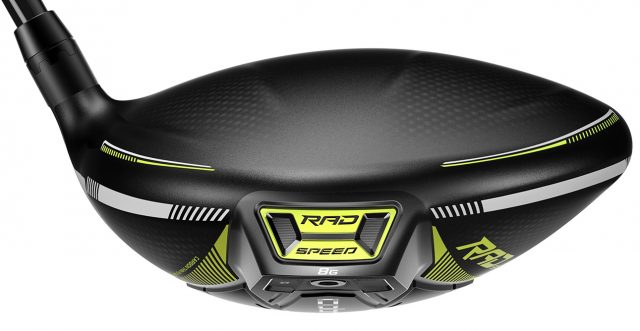 RADSPEED XB (Xtreme Back) DRIVER – £369
For players who want plenty of speed and distance but value forgiveness, and a club that flies effortlessly straight, the RADSPEED XB is the answer. One of the two “Xtreme,” versions in the RADSPEED lineup, the XB (Xtreme Back) features an oversized address profile that inspires confidence on the tee.  The 460cc clubhead utilizes rear-biased Radial Weighting to deliver the fastest and straightest ball flight of the three models. The driver features 20g positioned in the back (14g of fixed weight; 6g interchangeable weight), and 8g of fixed weight in the front, making the XB arguably COBRA’s fastest and most forgiving driver to date.
For golfers that preferred COBRA’s 2020 SPEEDZONE Xtreme driver, the RADSPEED XB delivers even more ball speed and lower spin while maintaining that extreme stability.  Additional technologies featured in the XB driver and the rest of the RADSPEED drivers include, a titanium T-Bar Speed Chassis and Thin-Ply Carbon Fiber Crown, CNC Milled Infinity Face and Radial Weighting Technology. 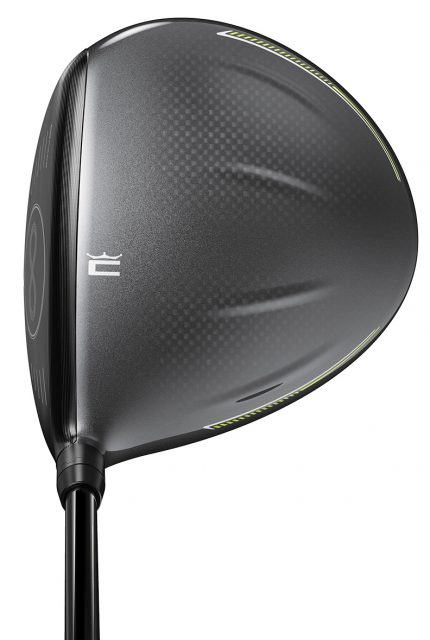 RADSPEED XD (Xtreme Draw) DRIVER – RRP £369
The RADSPEED XD debuts as the newest addition to COBRA’s driver offerings, answering the need for a draw-biased, straight-neck driver. The XD is COBRA’s longest and fastest draw-biased driver designed to provide maximum distance and slice-fighting power.  This second “Xtreme” model features the same slightly oversized 460cc profile as the XB, but with heel-biased Radial Weighting. 10g of fixed internal weight is positioned in the heel to enable easier face closure for straighter, draw-biased drives. Another 14g is positioned in the back for extreme forgiveness, while 8g is positioned in the front to increase speed.

Women’s models also are available in both the RADSPEED XB and XD in a Gloss Black/Elderberry colour featuring a Project X Even Flow Riptide shaft and Lamkin Crossline (58R) COBRA CONNECT grip. 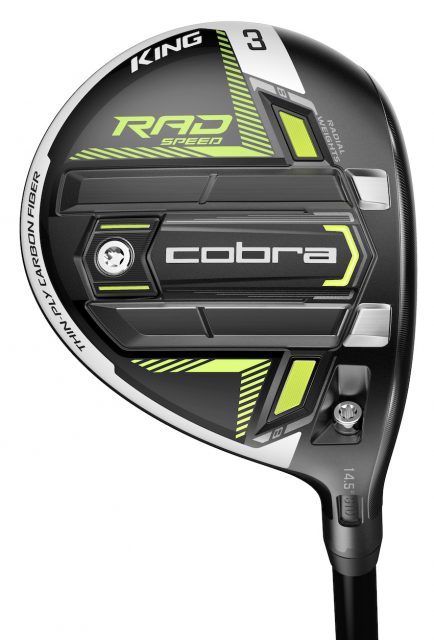 RADSPEED Fairway – £229
features a traditional shape with a balance of front and back Radial Weighting (16g in the front & 7g in the back) to deliver ultra-low spin, with high launch and forgiveness.  A CNC Milled Infinity Face makes its way into the RADSPEED fairway for the first time, creating a face design that is up to 5 times more precise than hand-polished fairways. Golfers have their choice of two premium aftermarket shafts: Fujikura Motore X F3 (Stiff & Reg) and Project X Even Flow Riptide (Lite flex).  Available in two colourways: Gloss Black/Turbo Yellow colourway.

RADSPEED BIG TOUR and TOUR Fairways – £229
Both feature 23g of front-biased Radial Weighting (16g internal & a 7g front weight). The Big Tour 3-wood features a slightly oversized profile, and a stronger loft setting, making it the fastest, and lowest-spinning fairway in the lineup, and the perfect complement to the RADSPEED Driver, whether off the tee or on the fairway. The Tour 5-wood features a compact profile for maximum workability. Both are available in Matte Black /Turbo Yellow and come with a Fujikura Motore X F1 shaft (X, S). 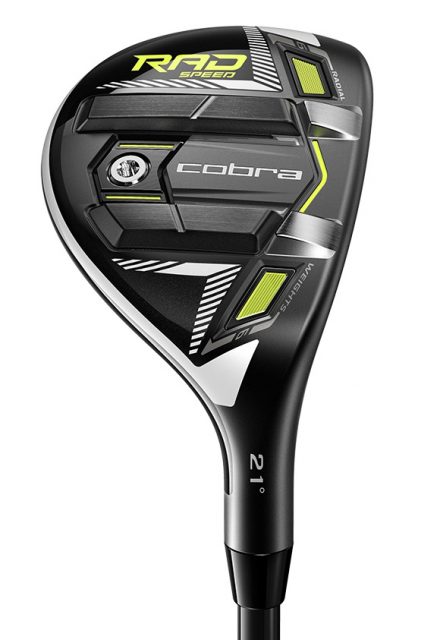 RADSPEED hybrids – £189
Radspeed hybrids, which are available in both standard (Gloss Black/Turbo Yellow colourway) and ONE Length (Matte Black/Red/Blue/White) models, also utilize COBRA’s innovative Radial Weighting Technology with the emphasis on extreme front weighting for ultra-low spin, faster ball speed, and increased distance. A forged, high-strength steel face insert, and Hollow Split Rails combine to create a lower CG location, higher launch angles, more distance, and enhanced versatility from a variety of lies.
The Baffler sole rails are a signature feature of COBRA’s fairways and hybrids, and allow the club to glide effortlessly out of the fairway, tight lies, thick rough and even bunkers. RADSPEED ONE Length is designed in a shorter set up (37.5”) that compliments the ONE Length irons in a combo set. Both the standard RADSPEED hybrid (Available in 2 (17), 3 (19), 4 (21) and 5 (24) and ONE Length model (Available in 3 (19), 4 (21), 5 (24) come stock with UST Recoil 480 ESX premium shafts and Lamkin Crossline (58+) COBRA CONNECT Grips. The RADSPEED Hybrid is also available in a women’s offering (4, 5, 6 and 7) in a Gloss Black & Elderberry colourway.

The entire RADSPEED metalwood family is equipped with COBRA CONNECT Powered by Arccos, the smart golf system that features electronically enabled sensors embedded into the grip that automatically record the distance and accuracy of every shot. Golfers also have access to Arccos Caddie, which utilises Artificial Intelligence to make better on-course decisions. With the purchase of any COBRA CONNECT club, golfers, at their request, will be sent additional sensors to screw in the rest of their clubs, delivering the full benefits of COBRA CONNECT Technology.

All RADSPEED products are available at retail and online from January 29, 2021. For more information, visit www.cobragolf.co.uk

18 January 2021
Kevin Na birdied four of his last six holes, including the 18th, to win the PGA Tour’s Sony Open by a single…Read More